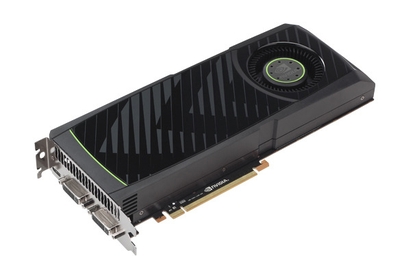 Nvidia and AMD's GPU arms race continues unabated, and the "world's fastest" moniker hangs in the balance. The latest salvo comes in the form of Nvidia's latest flagship graphics card, the GeForce GTX 580. Priced at US$500, the card sits right at the upper echelons of the graphics card market, aimed squarely at the enthusiasts who will suffer nothing but the best.

And they'll find speed in spades here: the GTX 580 is the fastest single-GPU graphics card on the market today, sailing through our battery of tests with aplomb. Be sure to check out Jason Cross' breakdown of the new card's innards, as compared to AMD's premier offerings.

A Tale of Two Cards

A scant six months ago Nvidia released their flagship graphics card, the GeForce GTX 480. Built on Nvidia's fledgling Fermi architecture, it was their first DirectX 11 graphics card. And it was quite a beast: a confluence of blistering performance and temperatures that generally topped the performance charts, but ultimately stumbled in light of AMD's well-established DirectX 11 competition.

With the GeForce GTX 580, Nvidia quite literally went back to the drawing board. The GPU inside the GTX 480 was re-tooled from the transistor level, as Nvidia worked to mitigate some of the power and temperature issues that plagued the card. As a result, the GTX 580 is quieter, cooler, and relatively more power efficient than its predecessor.

Putting Fermi to the Test

We pitted the GeForce GTX 580 against its predecessor, the GTX 480, and AMD's Radeon HD 5870 and HD 5970. A note about the Radeon HD 5970: while it is a single graphics card, it's actually a pair of GPUs, sandwiched together. We've chosen to include it as it represents the absolute best that AMD has to offer.

Synthetic benchmarks aren't necessarily a barometer of real-world performance, but they're handy for getting a solid idea of how cards stack up. This is particularly true for the Unigine Heaven benchmark. This strenuous DirectX 11 test is laden with geometry-heavy scenes and tessellation -- the Fermi architecture's bread and butter. The GTX 580 takes a decisive lead, ousting even the HD 5970's ample muscle.

While the Radeon HD 5970 clambers back into the lead on the 3DMark Vantage benchmark, it isn't ahead by very much -- 7%, on the Extreme setting. That's not a bad showing from the GTX 580's single-GPU.

The GTX 480s chief faults lay in its unwieldy power demands, and Nvidia has gone a long way to rectifying that issue. AMD's Radeon HD 5870 is (unsurprisingly) the least demanding of the cards we looked at, but the GTX 580 managed to shave 20W off of its predecessor's idle and full load power ratings.

The improvement shows once we take performance per watt into account. The Radeon HD 5970 takes the lead as the most efficient card, but the GTX 580 makes dramatic strides over its predecessor, overtaking even the venerable Radeon HD 5870.

Nvidia was late to the DirectX 11 game, and the GTX 480 ultimately failed to make much of a splash. But an extra six months in the proverbial tool shed has resulted in quite a showpiece. The GeForce GTX 580 is everything the GTX 480 should've been, but it's still saddled with some of the same problems. There's still no answer for AMD's Eyefinity technology -- if you want to run three (or more) monitors, you'll still need to pick up a second GTX 580. The GTX 580 also lacks a DisplayPort connector, offering up a pair of DVI connectors and a mini-HDMI port instead -- AMD's cards offer the full gamut.

DisplayPort concerns aside, Nvidia has managed an impressive feat. An unwieldy titan was reforged, delivering a component that outpaces the competition, and earns the vaunted "world's fastest" moniker.