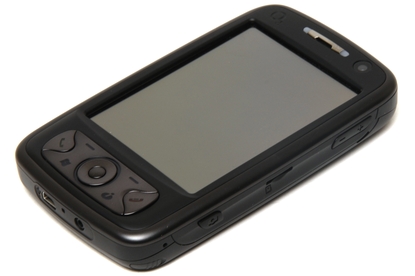 While it won't appeal to everyone and comes with a hefty price tag, the Flame certainly does an excellent job of providing a great multimedia experience, thanks to an on-board graphics processor and quality display.

The first ever smart phone to include a dedicated graphics processor, O2's Xda Flame features an NVIDIA GoForce graphics processor. It also has a whopping 2GB of internal memory, a 3.6in VGA touch screen, a TV-out feature and SRS WOW HD sound. Clearly designed as a true portable media player and phone in one package, the Flame packs quite a punch, but its hefty price tag is a sour point.

With a 3.6in VGA (640x480) screen and a dedicated graphics processor, it's clear that the Flame is all about a multimedia experience. The display is one of the largest we've seen on this type of device (it's slightly bigger than the iPhone's 3.5in screen) and it performs well. We particularly enjoyed watching videos landscaped in full screen mode, and the crisp and clear nature of the display is a real head turner. We would have liked the screen to be a bit brighter though, and its performance in direct sunlight is poor, with strong glare proving a hindrance.

The display works in tandem with an NVIDIA GoForce 5500 graphics processor, which improves the graphical capabilities of the Flame over a regular smart phone. We're not sure what specific applications are going to make use of the graphics processor, but they should be related to videos and games. Nevertheless, videos played on Windows Media Player are of a good quality, and we have no qualms about recommending this for use as a portable media player. It also performs excellently for Word and Excel documents, as text is detailed, crisp and smooth.

Continuing the multimedia theme, the Flame features TV-out, so you can output what's shown on the display to a projector or television. It only uses a composite connection, but despite this, it performs well on an LCD television. Connecting the Flame to a television allows navigation of the whole phone, including reading and sending messages, playing games and watching video.

Perhaps an even more interesting feature than the graphics processor and VGA display is the Flame's support for USB On-The-Go (USB OTG). An adaptor included in the sales package allows you to connect a USB flash drive to the unit. The flash drive appears as a hard drive in the file explorer in Windows Mobile 5, and just like a regular PC, files can be copied from the phone to the drive or vice versa. This is an excellent feature and one that has plenty of usefulness; especially when taking into account the Flame's 2GB of internal memory. You can connect a number of gadgets using USB OTG, including printers, hard drives, digital cameras and MP3 players.

The Flame supports a wide range of file formats, most playable through Windows Media player. These include MP3, WMA, WAV, AMR-NB and MIDI files. Unfortunately, media support is let down by a 2.5mm headphone jack instead of the standard 3.5mm. This means users will need an adapter before they can use their own set of headphones with the Flame, though the included headphones offer reasonable quality audio. The SRS WOW HD surround sound experience is average, but the speakers on the sides of the unit do a reasonable job considering this is a portable device.

O2 has again included its own applications on the Flame; O2 AutoConfig, O2 AutoInstall, O2 Connect, O2 MediaPlus, and O2 SMS Plus. We found the O2 MediaPlus application very useful; it's a single interface where users can access all their multimedia files, including the on-board FM radio. Keep in mind that the included headphones act as the antenna for this feature. Also very useful is the Remote Control application where you can wirelessly control any infrared devices in your home or office, including televisions, home theatre systems, DVD players and more. You can control up to five devices with the Flame, and if the brand of your equipment is not listed in manufacturers, you can program a device manually.

The Flame is powered by an Intel XScale PXA 270 520MHz processor, 64MB of flash ROM, and 128MB of RAM. The processor does a very fair job, as we experienced minimal slow-down on normally taxing functions, including running multiple applications. Despite the whopping 2GB of internal memory, O2 has included a microSD card slot on the right side of the unit, although you'll need to purchase a card separately.

Photos taken with the 2 megapixel camera are decent, but far from sharp or vibrant. There is a white LED strobe flash and a self-portrait mirror, but night-time photography isn't the best. Being a 3G handset, the Flame also includes a front mounted VGA camera for video calling, and this can also be used for portrait photos. The camera is capable of capturing photos at resolutions from 176x144 up to 1600x1200, and sports up to 4x digital zoom, and a 10 second self-timer. There is also a video camera, which captures 3GP or MP4 files at resolutions up to 352x288, but the quality is below average.

Measuring 126mm x 74mm x 17.5mm and weighing 190g, the Flame is one of the larger smart phones we've reviewed, although its bulky form is understandable considering the large screen and graphics processor that it possesses. Regardless, the Flame won't appeal to all, and it's important to establish that this is a real multimedia-centric device. While it has plenty of business features, its clear that corporate users aren't going to be throwing away their BlackBerry's.

Looking fairly bland, the Flame is finished in a subtle matt grey and black plastic, and it isn't going to win any design awards. The rear battery cover is finished in an etched, chequered design, while the controls are slightly raised and comfortable to press. There are two selection buttons, answer/end call keys, a start button and a programmable shortcut button below the display. The right side has a volume control, the microSD card slot and a dedicated camera button, with dedicated wireless and record buttons on the left hand side.