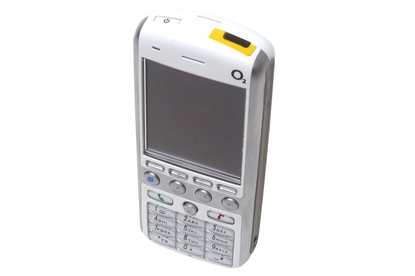 This model is essentially the same as the Xphone II, with only a few improvements.

The O2 Xphone IIm retains all of the features of its predecessor (the Xphone II) while adding a new case, dedicated multimedia buttons and a newer version of Windows Media Player.

The first major difference in the IIm is the new silver and white casing, replacing the black and silver of the older model. Like the Xphone II, the IIm comes with a Home key and a Back key, but new menu select buttons are also provided below the display. In addition, an Internet Explorer button sits just above the keypad, along with three new buttons for use with Windows Media Player. One small issue is the five-way joystick on the IIm, which is slightly smaller and not as sensitive as the Xphone II.

The specifications of the Xphone IIm are almost identical to the Xphone II; the new model is slightly larger and heavier. The 2.2" TFT LCD screen size and resolution remain the same, as does the Texas Instruments 195MHz processor and 32MB of installed memory (with 64MB flash ROM). A miniSD slot is provided, but the phone needs to be switched off and battery removed in order to get to it.

The IIm ships with the same software bundle as the Xphone II, running Microsoft Windows Mobile 2003 Second Edition with Pocket Outlook installed. It supports SMS, MMS, and Internet Explorer Web browsing. The IIm also comes with Windows Media Player 10, meaning that content with encoded with digital rights management (DRM) can now be downloaded and played on the phone. The IIm also has a VGA camera and, somewhat disappointingly, O2 has persisted with the 2.5mm headphone jack.

As a standalone tri-band smartphone, the Xphone IIm is good value at $649 and will meet the needs of consumers who want basic PDA functions on their phones. Apart from the casing, colour, support for USB 2.0 and dedicated multimedia buttons, however, there is not much to differentiate the IIm from its predecessor.