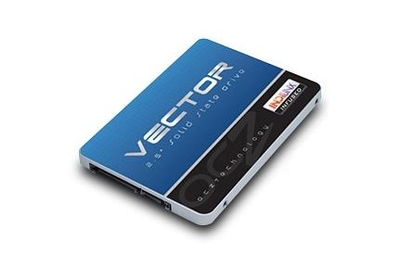 OCZ's Vector drive is a worthy upgrade for anyone who wants to give their laptop or PC a major speed boost. It was very quick in our tests, both when it came to booting the system and reading and writing sequential data, and we think it's great value overall, especially considering that it comes with a game bundle. The only downside for us is that it's a little too heavy.

OCZ's Vector solid state drive (SSD) is a high-performance model that's aimed at high-end consumer and workstation users. It comes in a 2.5in form factor that's suitable for installation either in a desktop or a notebook — it comes with a 3.5in drive bay mounting kit for the former scenario, while the drive's 7mm thick allows it to fit in most notebooks — and it's a solid unit that's housed in an alloy enclosure.

The interface on this drive is SATA III (6 gigabits per second) and it has memory chips that are based on multi-level cell (MLC) technology. MLC is the favoured technology for consumer solid state drives that are to be used in high-density applications and the Vector is available in 128GB, 256GB and 512GB capacities. We looked at the 256GB drive, which has a formatted capacity of 238GB. At a cost of around $275 from many online tech stores (not including delivery or other charges), that gives the 256GB Vector a cost per formatted gigabyte of $1.15, which is a little better than a speed-comparable Intel 520 Series SSD of the same capacity, for example.

The Vector relies on an Indilinx Barefoot 3 controller, rather than the SandForce 3 that we've seen on other recent drives, such as the OCZ Vertex 3 LP and the Intel 335 Series. The TRIM command is supported, which tells the SSD which data is no longer needed, and background garbage collection is supported, too, which is a feature that allows the SSD to consolidate blocks of data sequentially in a bid to keep the overall performance of the drive optimal.

In our tests, the Vector showed that it is indeed a very quick drive. It put up solid sequential read and write rates in CrystalDiskMark of 484 megabytes per second (MBps) and 494MBps, respectively. Its random read and write performance was very quick at 391MBps and 466MBps, respectively, for 512KB data, and 23MBps and 49MBps for 4K data. These are the fastest numbers we've seen from a single drive in this benchmark, and they lend credence to the application usage models that OCZ has designed it for, which are mainly gaming and high-end productivity applications. The fast results were backed up in our file duplication test, in which is averaged a blistering pace of 212MBps. That's much faster than the Intel and Vertex drives that we've tested in the same system.

Importantly, the drive felt very fast during everyday usage in our test laptop, a Dell Latitude E6420. A cold system boot-up time took only 20sec with a clean installation of Windows 7 (64-bit), which is 20 seconds faster than the boot-up time this laptop usually puts up with its stock WD Scorpio hard drive, and up to 8 seconds faster than the Intel 335 Series and OCZ Vertex 3 LP drives that we've also tested in this laptop. As far as power usage is concerned, the Vector isn't as good as those drives. In our battery test, in which we disable power management, enable Wi-Fi, maximise screen brightness and loop an Xvid-encoded video, the Vector lasted 3hr 14min, which is 3min less than the Vertex 3 LP and 7min less than the Intel 335 Series. However, it's still 10min better than what the laptop got with its mechanical drive.

The other benefits of this drive should be clear, especially if its usage is to be inside a laptop: it will run silently, it won't cause vibration and it will not put out as much heat as a mechanical drive. It's a great drive to go for if you're after a high-performance upgrade for your notebook, but it should also be considered if you want a fast system drive for your desktop PC. It comes with a metal plate that allows it to be installed easily and securely in a 3.5in drive bay. The only downside for laptop users is that it is slightly heavier than other drives we have seen because it has such a solid enclosure — at 115g, it's 5g heavier than the 500GB WD Scorpio mechanical drive that we replaced in our test laptop.

For gamers, there is an extra incentive to purchase this drive. Until 14 July 2013, users who purchase a 128GB, 256GB or 512GB Vector drive will be able to take advantage of a Far Cry 3 bundle. More information on this can be found on OCZ's Web site. It makes this drive better value for money, especially if you had an intention of buying that game at a latter date.