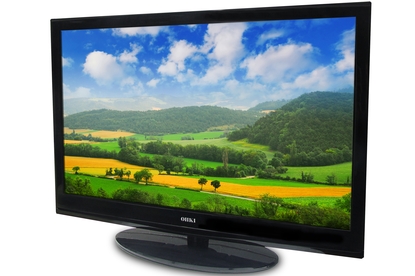 Ohki's cheap 3D TV uses an LG panel with passive cinema-style 3D. This means that for a cheap TV its 3D is surprisingly good (as long as you're sitting close). The TV's main impediments are its low contrast ratio and the lack of a video-smoothing 100Hz or 200Hz mode, so it's not that great for watching action movies or sports. As a (reasonably) cheap TV with bonus 3D it makes a reasonable buy for a kids' rumpus room.

Ohki's 42" Full HD 3D TV with PVR: exactly what it says on the label. For the TV's wallet-friendly $699 price tag, you get a 42in passive-3D LCD TV (no LED backlight, unfortunately), space-age remote control and four pairs of passive 3D glasses. The TV can record free-to-air digital broadcasts once you plug in something for it to record to (a flash drive or portable hard drive, over one of the two USB ports) as well. The price-squeezing comes from Ohki's use of a reasonably low-grade LCD panel, which has implications on overall image quality.

The Ohki 42" Full HD 3D TV with PVR (or 'the Ohki' if you want to save some syllables) is, as the name suggests, 42in in diagonal screen size. This means it's just over a metre wide and just under 70cm tall. Because it's not an LED model it's not especially thin, stretching our tape measure to a slightly chunky 11cm thick at its deepest point. The TV's design is nothing special — piano black bezel, rounded base, no swivel — and it's got the

Three HDMI connections, VGA, component, composite and digital audio outputs are par for the course here — the only real difference you'll see with buying a bigger, more expensive TV is an extra HDMI port. If you're only going to be plugging in a single HDMI device like a Blu-ray player, this is hardly a concern. The Ohki's remote control is shared with the similarly-cheap-and-3D Kogan 55" 3D LED TV with PVR, suggesting that they're sourced from the same manufacturer or supplier in China. It's not a bad remote control, even though it's a little bright and gaudy with sky-blue buttons.

As expected, the Ohki's PVR function works acceptably when when a portable external hard drive is hooked up. The on-screen TV guide is OK rather than good but if you persevere it's not too hard to record shows to watch later.

The Ohki 42" Full HD 3D TV with PVR has a 42in screen with a 1920x1080pixel resolution — the once coveted but now commonplace Full HD. It used to be the case that you would have to pay $2000 for a Full HD screen, but since you can get 23in Full HD computer monitors for hardly a tenth of that, we think that myth is well and truly busted. More important than the resolution in any case is the screen's contrast ratio and ability to cleanly display high quality detail in video.

When playing back a Full HD Blu-ray movie — something colourful and simple like Toy Story — the Ohki is able to display a reasonable amount of on-screen detail. The 42in panel of the Ohki, sourced from the same manufacturer as LG's panels, doesn't stand up when it's directly compared to something like a LG 47LW6500 or even a Panasonic TH-L42U30A, but in isolation its screen looks reasonably good.

What hamstrings the Ohki 42" Full HD 3D TV with PVR is its low contrast ratio. Not being an LED-edgelit or panel its ol'-school fluorescent backlight has to light the entire screen simultaneously, and therefore different screen segments can't easily be shown at different brightness levels. While this isn't a problem if everything on-screen is dark or everything on-screen is light, this is rarely the case. Take rolling movie credits as a specific example: The dark background and bright text means the TV's backlight has to compromise; the raised brightness (to accomodate the text) means the background is slightly grey rather than black. If you're not overly concerned with this phenomenon, which does also appear in day-to-day viewing but not annoyingly often, it's not a huge problem. If image quality is something you are strongly concerned about, we'd be cautious to recommend the Ohki.

Another issue is the lack of a 100Hz screen-smoothing mode. This isn't a huge drama for anyone who doesn't watch a great deal of fast-moving sport or action movies, but when there's on-screen motion (a fast panning shot in video, or a fast object moving against a static background, are the classic examples) the Ohki does tend to blur a little and lose some of its clarity.

This TV is only the second or third we've seen that uses passive cinema-style 3D glasses rather than active shutter battery-powered ones, and it's also the first properly cheap one. We're pleased to report that the 3D effect is reasonably 'deep' and effective despite the low price, although the screen's small size means you need to sit very close for it to work its magic. Ohki includes four pairs of cheap passive 3D glasses in the TV's box, although we used a pair from an LG set without any problems — we didn't see any option to buy more glasses on Ohki's site but LG's are $19 for two pairs of glasses.

Ohki's cheap attempt at 3D works reasonably well. It's not too bad for 3D, it's OK for everyday TV or movie watching and it's reasonably well priced. Another contender to consider: Kogan makes a 42in Full HD LCD TV which looks suspiciously like the Ohki, and it will be $639 once it's in stock. Buy it early and it's $550 or less. As it stands, we think the Ohki is OK for its asking price.