Olympus rolls out a rival to Canon's PowerShot S95 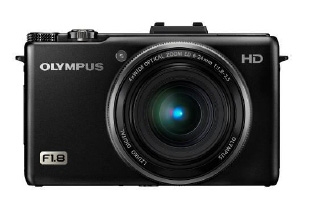 The Olympus XZ-1 is one of the more interesting digital cameras to have been unveiled at this year's Consumer Electronics Show.

The compact, pocketable XZ-1 is a high-performance point-and-shoot that's geared to go toe-to-toe with Canon's PowerShot S95. The 10-megapixel CCD-sensored XZ-1 has a fast, bright F1.8 aperture at the wide-angle end of its 4x optical zoom (28mm to 112mm) that's an F-stop wider than any other pocket camera on the market. It also boasts an equally impressive F2.5 aperture at full telephoto -- that's a wider aperture than most compact cameras have at their wide-angle end.

The XZ-1 is the first Olympus fixed-lens camera to offer a Zuiko lens, which is bolstered by dual optical/digital image stabilisation. Olympus is touting the camera's low-light capabilities, thanks to its wide aperture, autofocus-assist lamp, and ISO adjustments that reach up to 3200. The camera also boasts a 3-inch OLED screen.

The XZ-1 also serves up a hot shoe on top of the camera that can be used with Olympus's attachable electronic viewfinder for the PEN series, an external microphone, and the company's new Macro Arm Light extension.

The Olympus XZ-1 is priced at US$500 and will be released in Australia in late February.