Olympus XZ-1: A small, fun and easy-to-use camera; great for novices, but pros should get a kick out of it, too 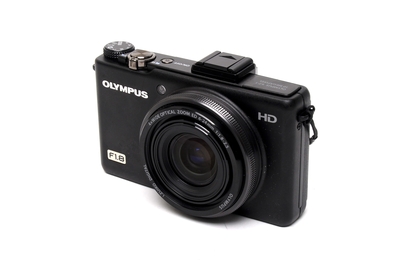 If you want to have fun while taking photos, then the Olympus XZ-1 is for you. It's easy to use, takes clear and rich images, and it even has useful art filters. We really like it and think it's great for novices photographers as well as pros.

The Olympus XZ-1 is positively fun to use. It's one of those cameras that makes you want to go out and take photos. A lot of that has to do with its size, which is compact; yet despite its small dimensions, it also contains relatively easy to use manual controls. It's reminiscent of the Canon PowerShot S95 and it definitely gives it good competition when it comes to ease of use and image quality.

View sample images from the Olympus XZ-1 in our gallery.

The Olympus XZ-1 has a 10-megapixel CCD sensor and a 4x optical zoom with a range of 28-112mm. It's a fast lens with a wide f/1.8 aperture, and this is even wider than the lens found on the Canon PowerShot S95 (f/2.0). It allows the XZ-1 to be used in low-light situations and combined with built-in optical image stabilisation, the camera can capture handheld shots clearly even when a shutter speed as low as 1/10 is used.

We think the Olympus XZ-1 is great for both enthusiasts and professional users who want a high-quality compact on those days when they can't (or are too lazy to) carry the old digital SLR. The manual features of the camera allow for custom exposure settings to be tuned in; the ring around the lens can be used to manipulate the aperture and the rotational thumb control on the rear can be used to change the shutter.

There a couple of things about the control scheme that we would change: we'd put in a dedicated ISO button and we'd also make it easier to change focus modes. As it stands, to change focus modes you have to make up to three button presses. We do like the way the focus point can be changed with the press of one button, though, so it's not all bad.

Perhaps the best thing about the Olympus XZ-1 camera is its OLED screen. It looks vibrant and has wide viewing angles. Like most screens, it can't be viewed easily in the brightness of day unless you shade it, but it only requires one hand above the screen blocking the direct sun to be viewable again. What you see on the screen is generally what gets committed to the SD card, and this means that you don't have to fiddle around much with the settings, nor take multiple shots in order to get the look you want.

In auto mode, the Olympus XZ-1 has a tendency to overexpose images, but only slightly. Its overall performance in this mode is very good and it means that anyone can just pick up this camera, point it, and with the aid of the OLED screen, capture good looking images. In manual mode, the camera helps out by letting you know if the image is properly exposed. The exposure meter will flash in red if the scene is underexposed — simply play with the aperture or shutter until the meter gets to zero and you'll be right.

If you want to get artsy, then you can turn the camera's mode dial to 'Art' and rotate the lens ring to pick one of seven different Art modes. These modes can make your pictures more vibrant, more dramatic, softer or grainier; it can give them dark corners and even make objects look smaller. It's one of the features that makes the XZ-1 so much fun to use — we had way too much fun using the Dramatic Tone filter.

As for the camera's regular, non-art mode quality, it's very good. Pictures are captured with rich colours and they are well defined. Some detail is lost when images are viewed at their native size, but unless you crop your images heavily, this should not be too much of a problem. Noise starts to creep in at ISO 800 and we recommend not using such a high ISO with this camera. With such a wide aperture available, you should be able to get away with a lower sensitivity in most cases.

The Olympus XZ-1 has a built-in pop-up flash, but it doesn't have an electronic viewfinder; there is an option for one (VF-2). It can capture Full HD video (up to seven minutes) and the art filters can even be used while shooting video. Some frames will be dropped when shooting with an art filter, but it's nevertheless a great feature that can be used on short videos. You have the ability to zoom while shooting video and the camera will focus automatically. We found the overall video quality to be very good, but the sound wasn't. Luckily, there is an optional stereo microphone that can be plugged into the hot-shoe (SEMA-1).

The speed of the Olympus XZ-1 camera is good. Shot to shot performance won't lag noticeably while the previous image gets written to memory and burst mode is capable of capturing around 2 frames per second for around nine shots before it slows down. The biggest performance hit comes when using the Pin Hole or Diorama filter, as the images on the screen refresh very slowly.

All things considered, we really like the Olympus XZ-1. It's easy to use, yet it has good manual features. But most importantly, it's a fun camera to use and it has interesting art filters to play with, too. We also like the screen and the fact that it mostly displays exactly what will be captured to the SD card. We wish the shutter speed was a little faster than 1/2000, and we'd change a few things about the controls and make a few things easier to access, but overall there isn't too much to dislike about this camera. It would make a useful travel camera, a fun party camera and it can even be a worthwhile addition to a professional's photography kit.