Opera 10.53 offers high-speed browsing thanks to fast JavaScript rendering and a Turbo mode, along with many customisation features 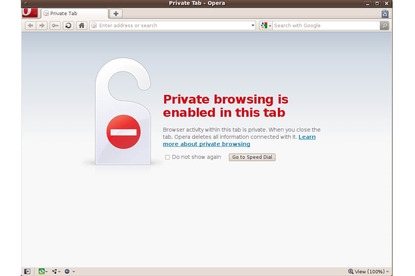 Opera is a very fast, secure and standards-compliant Web browser. Its very power is also something of a hindrance as some users may find the wide range of preferences too bountiful to easily tweak to suit. Mac users may prefer to wait for some bugs to be ironed out if they’re used to the stability of Safari or Firefox. In the highly competitive world of Web browsers, Opera is a name to watch, and emphatically a browser worth trying.

Now that the Windows world is weaning itself from Internet Explorer, another serious alternative exists alongside Google Chrome and Apple Safari as an alternative to Mozilla Firefox.

Opera has been around for 14 years, but the latest version is every bit as fast and powerful as the very best of the competition, and offers useful features unavailable elsewhere.

With mobile internet becoming increasingly popular, Opera also offers two versions for use on mobile phones – Opera Mobile and Opera Mini – but for this review we'll look over the regular desktop version - available for Windows, Mac and Linux.

In start contrast to IE, Opera has long made a point of following open web standards in its rendering engine. This once used to undermine its reputation, when pages would look incomplete compared to the same sites on the predominant Microsoft browser.

But thankfully the days of IE-specific site coding are closing, and most websites tend to appear faithfully on standards-compliant browsers.

To gauge JavaScript speed, we tried the Sun Spider test on the above versions of Firefox, Opera and Safari. Firefox trailed at 1005 millisecond, Safari came second at 487ms while Opera finished first with 410ms.

The interface of Opera is relatively clean, with tabs arrayed across the top by default. On Windows 7, these tabs feature translucent Quick Peek previews. But in this widescreen age, it's handy that you can also put tabs on one side – with permanent page thumbnails – giving more vertical headroom for page content.

Clicking a button at the browser's bottom-left corner reveals unnamed icons in a slim slide-out panel. These provide links to items such as Bookmarks, Downloads and History. Extra panels can be added via the + sign here.

Your favourite sites can be bookmarked within a Speed Dial page – a layout copied in Safari as Top Sites – which gives large site thumbnails across a complete page; by default in a 3x3 matrix, which can be expanded up to 25 sites in 5x5 form.

Adding new sites to Speed Dial is not as straightforward as we'd hoped. From a given Web page, there's no simple button or even contextual menu to do so; instead you go back to a Speed Dial page, right-click on a vacant space, click Edit, then chose from a list of recently visited sites to find and insert your chosen site.

Opera's Turbo mode helps speed page loading on slower connections, by recompressing images on Opera's servers before you receive them.

Turbo is off by default, and can be set to always on, or automatic, sensing when you're on a slow internet connection.

This compression reduces image quality slightly of course, but more politically charged, it entails all your viewed web pages to go through one of Opera's six worldwide server farms. These handle a lot of traffic: in the last month alone, they served 26 billion pages, almost three times the total number of search requests that Google fielded in the same time.

Norway is outside of the EU and its regulations, and while the company complies with local laws and states that it doesn't store personal browsing history as does Google with its tracking cookies, Opera's subsidiary is the advertising aggregator AdMarvel.

It's unclear if or how AdMarvel makes use of this vast and valuable archive of user browsing habits. And Opera Mini, for example, always uses Opera's proxies for server-side compression, so mobile surfing is certainly being thoroughly monitored.

Elsewhere in Opera, useful security and privacy features are found. Private browsing can be started on a single tab, rather than through an entire browsing session. Plug-ins can be blocked on a site-by-site basis, even if global blocking of Flash, for instance, requires more expert knowledge of the browser's configuration, and some third-party scripting.

A simpler and more transparent process to block/allow unwanted elements such as Flash, JavaScript and Java would be welcome.

Other interesting features in Opera 10.53 include support for themes, including a transparent glass theme for Windows 7; and new support for multi-touch gestures in Mac OS X, such as pinch-to-zoom and three-finger page navigation. Two-finger scrolling here is strangely over-accelerated though.

Opera Link usefully enables synchronising of bookmarks, history and saved searches across different computers, and does so automatically in the background once you've opened a free account with Opera.

The opportunity to open recently closed tabs is a handy asset. And full control of Opera through the keyboard, rather than mouse, will appeal to both disabled and power users. There's even a built-in BitTorrent client.

Issues we encountered include occasional crashes and hangs in OS X, and some unpredictable open of tabs – sometimes in the background as expected, sometimes with the new tab taking focus.