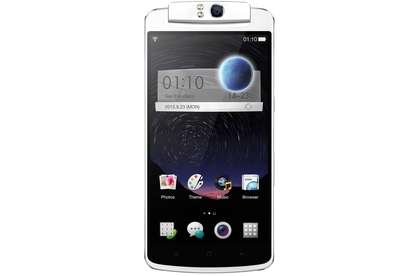 Little-known Chinese smartphone manufacturer Oppo has just announced its latest flagship Android smartphone, the N1. It features the "world's first rotating smartphone camera", has a full HD, 5.9in display, and comes with an "O-Touch" panel on the rear.

Chinese smartphone manufacturer Oppo has just announced its latest flagship Android smartphone, the N1. It features the "world's first rotating smartphone camera", has a full HD, 5.9in display, and comes with an "O-Touch" panel on the rear.

The most notable feature of the Oppo N1 is a single-camera that rotates depending on whether you want to use it on the front or rear of the phone. The 13-megapixel camera rotates 206-degrees, and will securely lock at any angle. Oppo says it tested 20 different camera designs before settling on the rotating design, and claims the camera housing includes more than 10 modules, 50 cables, and 67 components. The company also says the rotating camera on the N1 has been tested to withstand 100,000 rotations.

Imaging is clearly a big focus of the N1. In addition to the rotating lens, Oppo says the N1's camera features a type 1/3.06 imaging module and an f/2.0 wide aperture. The company also claims the LED flash on the phone uses a normal flash for back facing shots, and a softer, diffused light for front facing shots, with brightness adjusted from the camera software on the phone.

Oppo has clearly taken inspiration from the LG's upcoming G2 handset by introducing controls on the back of the N1. However, where LG moved all physical controls to the back of the phone, Oppo has opted to introduce a touch panel called "O-Touch". The 12 cm2 rear touch panel allows users to scroll, tap, and capture photos on the device.

The Oppo N1 is constructed using two cut chamfers that run along the sides of the phone. The company says the full metal aluminum alloy frame undergoes a 14 step polishing process involving more than a dozen suppliers. The case of the phone itself uses a smooth, ceramic-like material, similar to the company's previous Find 5 handset.

The inclusion of the rotating lens, O Touch panel and aluminum construction comes at a cost of weight. At 213g, the Oppo N1 immediately becomes one of the heaviest smartphones on the market, even weighing more than Nokia's Lumia 920. Oppo manages to keep the thickness of the N1 to just 9mm, but the weight is likely to detract many potential users.

The Oppo N1 is powered by a 1.7GHz Qualcomm Snapdragon 600 quad-core processor, has 2GB of RAM and comes with either 16GB or 32GB of internal memory. However, there's no microSD card slot to expand the memory, and the N1 also lacks 4G connectivity. The phone comes with a non-removable, 3610mAh battery.

The Oppo N1 runs the 4.2 Jelly Bean version of Google's Android operating system, but is skinned with Oppo's own ColorOS overlay. In addition to ColorOS, Oppo will also sell a version of the N1 that runs the CyanogenMod ROM pre-installed, making it the first device of its kind globally.

Oppo will also sell an accessory called the O-Click that lets you remotely operate the N1 camera. O-Click attaches to any keyring and will work up to 50 metres away from the N1 via Bluetooth Low Energy technology.

The Oppo N1 will launch worldwide in December, but there's no word on whether the device will officially be sold in Australia.

A promotional video of the Oppo N1 can be viewed below.