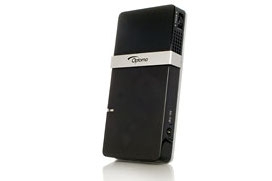 The prospect of projecting an image anywhere becomes a reality with Optoma's Pico PK-101 pocket projector, the first shipping product we've tested in this burgeoning new projector category. Introduced earlier this summer, the Pico PK-101 projector (799 street) lets you easily give presentations or share photos and videos from your iPod, smart phone, or digital camera. Its ease of use and compact size make the Pico PK-101 pocket projector a nifty gadget for anyone who shares media or presentations with a select few. But its minimal lamp and limited projection capabilities mean that it can't replace a traditional mobile projector.

The Pico PK-101 projector package includes the cables needed to hook it up to a TV or mobile device (iPod, PDA, digital camera, or the like), along with a carrying case, an AC adapter, and two lithium ion battery packs, which Optoma says will last 90 minutes each. Featuring a 480-by-320 native resolution, the Pico PK-101 can project an image measuring 60 inches diagonally from a distance of 8.5 feet. The projector itself is about the size of a cell phone, so it's easy to toss in your bag and take with you.

The Pico PK-101 comes bundled with a 1/8-inch minijack cable for projecting from a mobile device or digital camera, as well as a composite audio/video cable for projecting from a TV or composite-equipped PC. You cannot project from a PC using DVI or VGA, however. Also, you may need a third-party adapter to use the Pico PK-101 with some newer iPod models that output through the dock connector rather than through the headphone jack.

When using the Pico PK-101 to view JPEG photos and videos from my fifth-generation iPod, I found its image quality to be good though somewhat fuzzy. This may not be a big deal for videos or photos, but it could make small text unreadable (such as on PowerPoint slides exported to JPEG images and then played back from an iPod). The Pico PK-101's built-in speaker is adequate for a small, quiet room, but it can't handle anything more demanding than that. And since the Pico PK-101's projection isn't as bright as that of a standard projector — its LED light is rated at just 9 lumens, versus an average portable projector's lamp rating of 2000 lumens — you'll want to use the Pico PK-101 in a dimly lit room.

The Pico PK-101 pocket projector will not suit your needs if you want to use a laptop for presentations or if you plan on presenting to a large group or in a large room. It's best match would be for presenting photos or slides saved on an iPod or mobile device to a small group. Despite its high price and limitations, the Pico PK-101 has the makings of a great mobile companion.