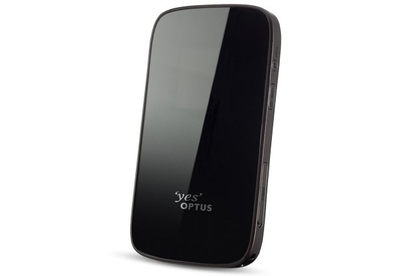 The Optus 4G Mini WiFi modem's chunky design and glossy, reflective front won't suit all tastes, but it provides impressive speeds if you're in a 4G coverage zone. The Optus 4G network is still in its infancy and therefore available in limited locations, but the Mini WiFi modem is a nice start.

Telstra was previously the only carrier in Australia to offer a 4G network since it launched in late 2011, but Optus has finally joined the 4G party. One of the first devices launched in conjunction with the new Optus 4G network is the company's 4G Mini WiFi modem. Its chunky design won't suit all tastes, but the Optus 4G network offers impressive data speeds provided you're in a 4G coverage zone.

A little on the chunky side

The Optus 4G Mini WiFi modem is a battery powered, portable wireless modem that's manufactured by Chinese company Huawei. The E589 device is certainly on the chunky side. It's slightly thinner than Telstra's pre-paid Wi-Fi 4G modem, but is both taller and wider. In fact, the Optus 4G Mini WiFi modem is almost all tall as an iPhone 4S, so it feels rather like carrying a second smartphone around.

We aren't hugely fond of the 4G Mini WiFi modem's design. The front is finished in an extremely glossy and reflective mirror-style surface which is tough to keep free of grubby fingerprints and marks. Unlike many other Wi-Fi modems on the market, the Optus 4G Mini WiFi modem's internal battery isn't removable. We do like the grippy feeling plastic on the back, though, which makes the device comfortable to grip.

The Optus 4G Mini WiFi modem is at least easy to use. The highlight is a small but readable TFT screen that displays plenty of information. There's no buttons or controls on the front. You'll find a power button, a WPS button and a plastic flap covering a full-sized SIM card slot on the right side, while a microSD card slot, a reset button and a standard micro-USB port for charging are on the left side.

Concealed behind the plastic flap hiding the microSD card slot is an antenna port that can be used to boost reception in flaky coverage areas if required. If the battery is flat the Optus 4G Mini WiFi modem can be connected to a computer via the included USB cable and used as a wired modem.

The Optus 4G Mini WiFi modem's screen displays information including signal strength, the network type (3G/4G), the number of devices connected and a battery level indicator. To change any settings, you'll need to access the modem's Web interface. It's accessible by pointing your browser to http://192.168.1.1 and logging in using the default password supplied. The Web interface is both straightforward and functional. Options include editing the SSID name and password, editing the APN, changing the screen time and a host of other advanced networking and security options.

The need for 4G speed

The Optus 4G Mini WiFi modem is marketed as a 4G device, but the multi-mode modem simply switches over to Optus' regular 3G network if 4G coverage isn't available. According to the telco, Optus 4G coverage stretches up to 10km from Sydney's CBD to cover suburbs like Port Botany and Chifley in Sydney's south, Brookvale and Dee Why north of Sydney, Vaucluse and Bondi Beach in the east and Silverwater and Homebush in western Sydney. The 4G network also services Newcastle, including areas like Maryland, Edgeworth and Cessnock, and will stretch up to 15-20km from the Perth CBD in Western Australia.

When you're in a 4G coverage zone, the Optus 4G Mini WiFi modem promises maximum theoretical download speeds of up to 50Mbps, which is around seven times faster than what you can achieve on the 3G network. These are maximum, best case scenarios though, and the results we achieved were far less, albeit still pretty impressive. Like all mobile broadband products, the speed of the Optus 4G Mini WiFi modem will depend on a number of factors including time, location, network coverage, signal strength and congestion.

Using the Optus 4G Mini WiFi modem in a 4G coverage zone we managed to achieve download speeds of up to 35 megabits per second but generally found speeds hovered around 22Mbps. During our test period at multiple locations including the Sydney CBD, North Sydney and Strathfield (all areas served by Optus 4G coverage), 4G download speeds ranged from just under 16Mbps to the best result of just under 35Mbps just outside Sydney's Wynyard railway station on George Street. Upload speeds were also impressive, ranging from just under 15Mbps up to almost 23Mbps.

Optus claims the 4G Mini WiFi modem's battery will last for up to six hours before needing to be recharged, but we found this was closer to around four and a half hours during real world use. This is a better result than Telstra's Mobile 4G Wi-Fi modem, which lasted around an hour less when we reviewed it earlier this year. Like most other Wi-Fi modems, the Optus 4G modem does get rather warm during prolonged use.