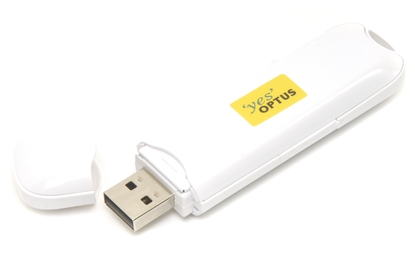 We can find little to fault about the Optus Wireless Broadband USB Slimline Modem's hardware, but a slow and unreliable 3G network makes it easy to pass up.

Optus' USB Slimline Modem has all the ports you would expect: a SIM card slot, a microSD card slot and an external antenna port. Unlike 3 Mobile's E160 USB Modem, however, these ports are hidden behind flaps that are difficult to open. The SIM card, for instance, is hidden under the plastic cap in a tray that can be difficult to remove. Opening the microSD card slot is equally difficult.

The Optus USB Slimline Modem has a theoretical maximum downlink speed of 7.2Mbps but we experienced difficulty even achieving somewhat usable speeds. During testing, the Optus USB Slimline modem fluctuated between HSDPA and slower WCDMA speeds despite remaining in the same location with full reception. Indoor use was particularly troublesome, though we witnessed similar issues outside.

The connection paused for 5-10 seconds each time the modem switched between HSDPA and WCDMA. Thankfully, this doesn't completely sever the connection. Given that we experienced similar problems with the Virgin Mobile Broadband USB Modem, this appears to be an issue with Optus' 3G network (which Virgin Mobile uses) rather than faulty hardware.

When we did manage to retain a HSDPA link, we saw an average real-world speed of 41 Kilobytes per second (KBps) when downloading the 70.8MB iTunes application. However, the majority of testing had to be performed using the slower WCDMA service, which had an average speed of 21KBps. Even with an HSDPA connection, the USB Slimline Modem should reach speeds closer to 150KBps.

Optus offers the USB Slimline Modem for $199 outright or $0 upfront on a 24-month contract. The telco's wireless broadband plans currently include 2GB for a monthly cost of $39.99, 5GB for $49.99 and 6GB for $59.99. Each plan can also be reduced by $10 per month when bundled with an Optus Mobile or Home Phone plan. These certainly aren't excruciating prices, though better value plans are available from 3 Mobile.