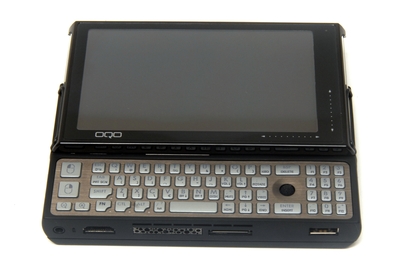 The OQO E2 is quite an impressive little design with some good connectivity and would suite a number of tasks, as long as they require more portability than power

Barely any larger than a PDA, the OQO E2 (configuration 1) is actually a fully fledged PC with Windows Vista Ultimate installed and functioning. Not only can it handle standard Windows applications, but it includes some good connectivity for such a small device.

The OQO E2 doesn't use Intel or AMD technology; instead it uses a VIA Esther 1.5GHz CPU. A total of 1GB of DDR2 RAM is installed and you even get 60GB worth of storage at your disposal. Other configurations of the E2 model also have solid state drives as an option.

The 5in screen is comfortable to view and slides up to reveal a track-point pointing device (eraser-head), a keyboard and a number-pad. They take a little getting used to, but are quite effective once you get the hang of it. However, don't expect to use this when typing long documents. If the track-point is not your style you can opt to buy a digital pen for an extra $40.

The screen offers a native resolution of 800x480, but the E2 keyboard also has zoom buttons, allowing you to zoom in on certain items and zoom out to resolutions of 1000x600 and 1200x720. This is quite handy when navigating. Even those with the best eyes will have trouble reading text at maximum zoom, but it gives you more of a birds-eye-view of the interface.

Possibly one of the best features of this device is its connectivity. A port extender is included in the sales package, which gives you a 10/100 Ethernet port and a VGA-output, but on the unit itself you'll find an HDMI port and one USB 2.0 port and a headphone jack for convenience.

We would have liked to see a second USB 2.0 port on the port extender, or even on the unit itself, as this will make it difficult to use a USB keyboard and mouse simultaneously. However, with VGA and HDMI you can easily output to a number of larger screen options. The E2 will output at a maximum resolution of 1920x1200.

Although typing isn't so fluid, general navigation is quite easy. The pointing device is between the keyboard and number-pad, and is easily manipulated using your right thumb, while the left and right mouse click buttons are positioned for your left thumb. The bezel of the screen has two touch sensitive scroll bars, allowing you to quickly move pages up, down, left and right - a very handy feature.

As you would expect the OQO E2 is not overly powerful. In WorldBench 6 it scored just 22, but the fact it completed the test (with the exception of the 3ds Max rendering test), is still reasonably impressive for such a tiny machine. As a battery test we ran a movie from the hard drive to see how long this device would go without a power source. It was able to keep going with the screen on and the sound at maximum for 100 minutes, a reasonable amount of time. It should last longer under normal working conditions.

Our only concern with this device is how warm it gets after extended use. Although we wouldn't describe it as hot, it isn't a comfortable temperature to deal with over extended periods of time.