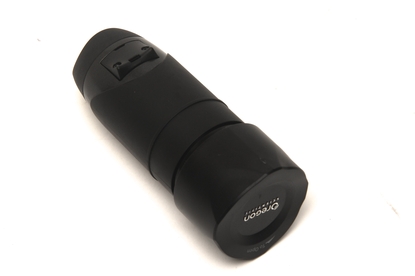 While not without its flaws, the Oregon Scientific ATC3K Action Camera is an excellent product for the asking price. If you're an outdoors enthusiast keen to chronicle your exploits, look no further. It's the best valued sports camcorder on the market.

For years now, compact camera manufacturers have offered special ‘ruggedised’ models for hard-hitting lifestyles, such as the ubiquitous Olympus Tough range. Unfortunately, the camcorder industry has been slow to catch up. It’s a strange anomaly, as video lends itself to outdoors action a lot more than photography does (think about it — would you rather look at a solitary photo of a skateboard trick or see the whole stunt in action?). Thankfully, Oregon Scientific has come to the rescue with the ATC3K Action Camera; a ‘bullet’ style camcorder that can stand up to some serious punishment.

As the stern-faced sportsmen on the packaging illustrate, the ATC3K is designed for outdoor activities of the ‘extreme!’ variety — think BMX racing, kayaking, skiing, abseiling, surfing and live alligator-wrestling. Whether your sport of choice involves water, dirt, snow or lots of falling over, the ATC3K can get into the thick of the action. In addition to being waterproof by up to ten feet (around three metres), the device is also shock-resistant and freeze-proof, ensuring it will survive in almost any environment. In short, it’s the action man’s action cam!

In terms of design, the ATC3K is a curiously topsy-turvy gadget. Its tiny lens resembles a viewfinder on a circa-1990s camcorder; complete with a dinky rubber eyepiece. To add to the confusion, the other end looks a lot like a traditional lens cap — it’s actually a waterproof lid that houses the SD card slot and AV/USB connections. We suspect a lot of users will accidentally take blurry close-up shots of their eyes before they get used to the camera’s inversed appearance. Well, it made us feel stupid anyway.

Measuring 108x44x57mm and weighing just under 200g, the ATC3K is quite bulky for a bullet-cam, and with good reason — it’s completely self-contained. By contrast, most bullet-cams (such as the Elmo) require you to carry around a separate recording unit. While we do appreciate the ATC3K’s all-in-one design, it does lead to a few significant problems. For starters, there’s no viewfinder or LCD display, which forces you to shoot blind — you just have to point it at the action and hope for the best.

We also weren’t keen on the additional size and weight. While this won’t cause any problems when mounted to objects (i.e. – a bike’s handlebars) it can prove quite troublesome when strapped to a helmet. In addition to making you look a bit geeky, the plus-sized gadget protruding from your head also gets uncomfortable quite quickly. If you’re specifically looking for a helmet-cam, we’d therefore recommend picking up a smaller lipstick-sized device.

The ATC3K records video at a maximum resolution of 640x480 to SD/SDHC memory cards (320x240 and 160x120 resolutions can also be selected). This puts it on par with a good-quality camera phone, which is appropriate given its price tag. The results are suitable for uploading to video-sharing Web sites like YouTube, or watching on smaller TVs. However, on larger high-definition displays the flaws and aberrations become far too obvious. Nevertheless, for the asking price it does a much better job than expected.

Unfortunately, the same thing cannot be said about the ATC3K’s audio output. Even in a quiet room, we found the muffled and echoed results to be wholly unusable. Don’t even think about supplying an on-the-fly commentary to accompany sports videos — your breath will be completely wasted. According to Oregon Scientific, this was a conscious decision to combat rugged usage. As the instruction manual states: “The ATC3K is specifically designed for extreme sports… It is for this reason we have made the microphone less sensitive.” Personally, we think they should have removed the audio functionality altogether and shaved a few bucks off the price. In any event, most ATC3K owners will add ear-bleeding rock music to their videos (it’s an 'extreme sports' thing), so the ability to capture audio probably isn’t important to them.

Oregon Scientific has neglected to include an SD card in the sales package, which means you’ll have to go out and buy one. On the plus side, the device does come with 32MB of inbuilt flash memory (though admittedly, this will fill up in a matter of minutes). Despite the omitted SD card, we were extremely impressed with the large number of bundled accessories. The array of mounting clips, straps and pads (not to mention a miniature tripod) should ensure your camera will fit to any surface.

The ATC3K action camera uses AA batteries rather than lithium-Ion. If you plan to take your camera on a skiing trip, you may want to do some online research, as certain AA batteries will cease to function in very cold climates.