Origin's Genesis Z68 is fast, expandable and, best of all, very well put together. It showcases some of the neatest cable management we've seen in a PC submitted to our Test Centre and it really highlights how much effort Origin puts in to its products -- not only does the company overclock them to get the most speed out of them, it also makes sure that they look great.

Origin puts a lot of effort into the design and construction of its desktop PC systems, systems which are designed specifically to suit serious gamers and power users. The company pays attention to fine details so that when you pull your PC out of its crate (yes, it ships in a crate), you will love every aspect of it. We certainly loved the Genesis Z68 during our evaluation period, although without the aid of a cordless drill to undo the crate's screws, it did take us a while to finally get around to using it.

Once we set this beast up on the workbench, it became evident just how much effort went in to not only the construction of this PC, but also its presentation. Its case is only one colour (white) with a little bit of highlighting (light blue), and it's an understated but beautiful design. There is a tinted window on the left side panel, but the case is not lit by a crazy assortment of lights. The end result is that you can't really see inside the system very clearly. In fact, it has no lights except for the motherboard's status lights. If you want lights, then you can specify this when you order your PC from Origin's Web site — you can also pick the colour of your case. Origin can paint cases a wide array of colours (either solid or metallic) and if you want something that really stands out, you can pick from one of two designs, although these are very expensive.

We think the Origin's case could use a nice light, if only so you can more easily marvel at how neatly the machine has been assembled. All the cables from the modular, 750W Silverstone power supply have been routed through the gap between the right side panel and the motherboard tray; all cables have been bent and tied out of the way. It's a cable arrangement that can be duplicated in a mid-tower ATX case such as the one the Genesis Z68 is built in, but it nevertheless takes time and skill to get it to look so neat. We definitely appreciate the work that's gone in to it. Not many vendors pay this much attention to cabling and design, except for Alienware. 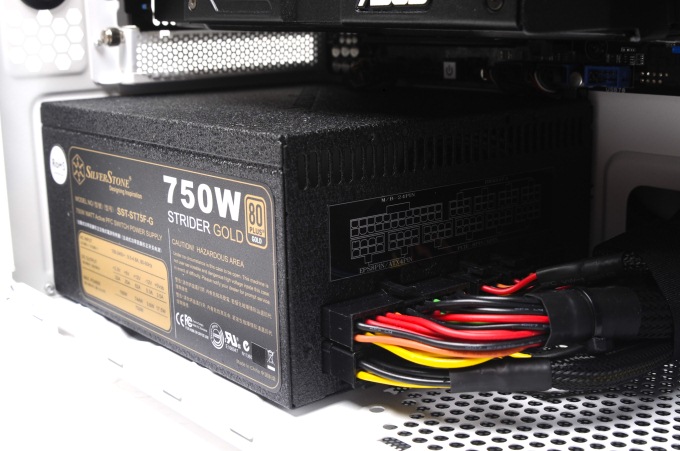 The Origin's modular power supply is located at the bottom of the case.

Indeed, the Origin Genesis Z68 looks fantastic and it's about as well built as a gaming PC can be. It houses a configuration that isn't as high-end as it gets, but it's still definitely capable of running pretty much any game you throw at it, and at high detail levels, too.

What keeps the Origin ticking is an Intel Core i5-2500K quad-core CPU, which has a regular speed of 3.3GHz and an overclocked Turbo Boost speed of 5GHz. (Its standard Turbo Boost frequency is 3.7GHz.) It runs on an ASUS P8Z68-V GEN3 motherboard, which features the Intel Z68 chipset. It's supported by 8GB of Mushkin 1333MHz DDR3 SDRAM, a solid state RAID 0 array (consisting of two 60GB Corsair drives) and an NVIDIA GeForce GTX 560 Ti SLI graphics configuration.

In our Blender 3D rendering test, the fast speed of the CPU was clearly evident; it completed our rendering task in only 16sec using all four of its cores. In our DVD-to-Xvid transcoding test, using AutoGordianKnot, we witnessed a record-breaking time of only 22min. Most mainstream desktops and high-end laptops take around 40min to complete this task.

But it's not just the CPU that makes this system go fast. Origin has installed two Corsair 60GB solid state drives in a RAID 0 array, which forms the main system drive (supplying 112GB of formatted capacity). Boot-up takes a mere few seconds and from then on the machine feels freakishly quick when launching applications and performing file management tasks. Using CrystalDiskMark, the RAID 0 array, which is attached to the SATA 3.0 (6Gbps) ports on the ASUS P8Z68-V GEN3 motherboard, produced a blistering read rate of 868 megabytes per second (MBps) and a write rate of 154MBps. The write rate is a little slower than we expected, but it's still very good for this test.

In our own transfer tests, where we duplicate 2.12GB worth of data, a rate of 176MBps was achieved, and this is the highest rate we have seen in this test to date. For smaller amounts of data, copy tasks can occur in the blink of an eye and you sometimes have to double-check that you actually did copy the data you wanted. While the main array is a little small with its formatted capacity of 112GB, a 1TB hard drive is also installed, which means you don't have to keep any files on the RAID array except for your programs. 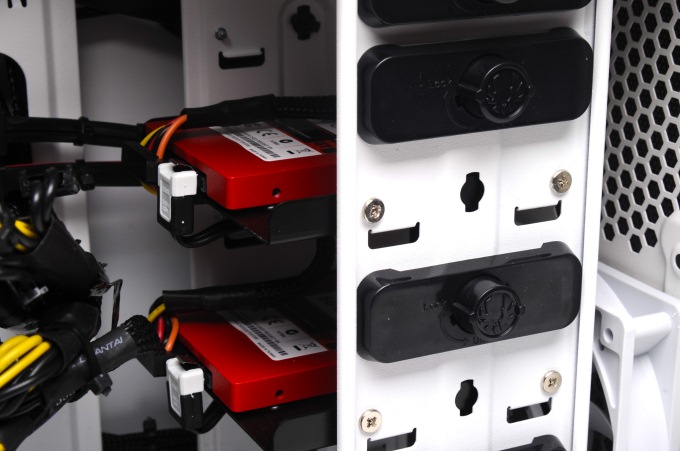 Two SSDs set up in a RAID 0 array.

For gaming, two ASUS GeForce GTX 560 Ti graphics adapters are installed in an SLI configuration. Each card has 1GB of dedicated graphics RAM, but both cards work together to supply high frame rates at high resolution and high detail levels. We tested the PC with a Samsung 275T monitor, which has a native resolution of 1920x1200. Running the latest games at this resolution was no problem at all for the PC, and we were even able to run them at high graphics detail without noticing a slow-down in performance.

Need For Speed: The Run ran super-smoothly at the highest detail levels and Battlefield 3 achieved between 80 and 100 frames per second (fps) during hectic battle scenes while in high detail mode. This rate dipped sharply below 30fps when we ran it in 'ultra' mode, so it's clear that an absolute top-of-the-line graphics adapter is needed to play that game in that mode. But still, high detail mode is nothing to scoff at, especially at a Full HD resolution. 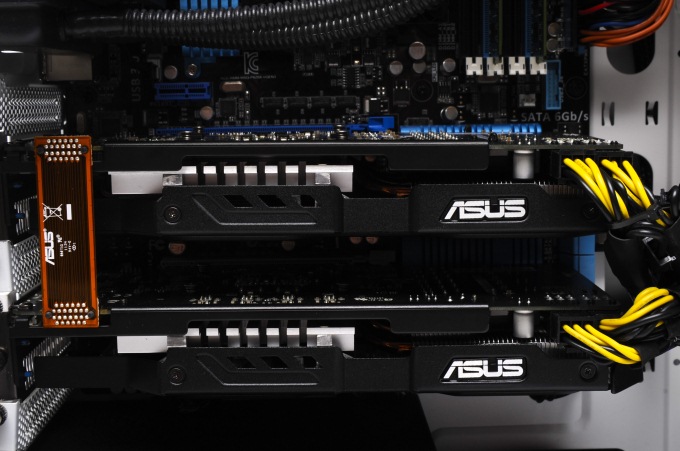 Origin hasn't installed a whole bunch of fans to keep this system cool. Instead, the CPU is liquid cooled and there is a 12cm fan installed on radiator, which is mounted at the top-rear extraction point of the case. Another 12cm fan is located at the bottom-front of the case near the drive bays, pushing air through to the back of the case. The only other fan is the one located in the power supply. The machine didn't get overly loud during our tests, but even if it did, we didn't really notice as we were too busy playing games. 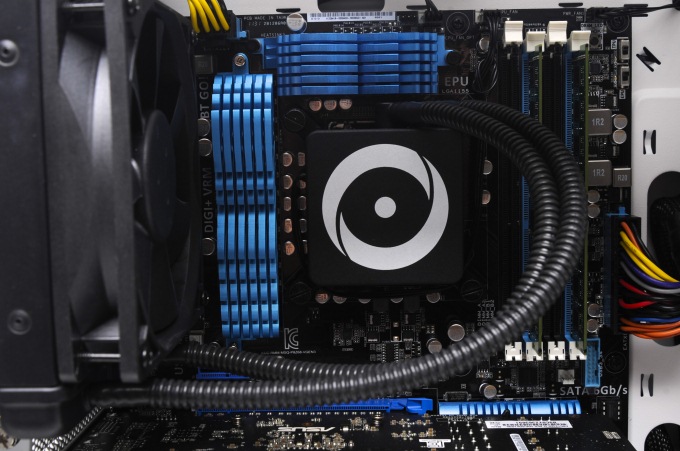 The CPU is liquid cooled and has its radiator mounted inside the top-rear of the case.

There is room for expansion in this case, especially in the drive bay at the front, which has room for six more drives (five 3.5in and one 5.25in). However, we wouldn't want to upgrade out of fear of messing up the build — it really is that neat. The drives face the rear of the case rather than the side, and the two 2.5in solid state drives have been installed in caddies and screwed in to the drive bay. The rest of the bay is tool-less though and other drives can be installed using the locking brackets that are supplied (and they even sport the Origin logo).

The motherboard has four memory slots and can accommodate a maximum of 32GB of RAM, and it has support for 2200MHz modules. Two 4GB modules occupied two of the slots in our test system. There are six SATA ports feeding off the Intel Z68 chipset, two of which are 6Gbps and four which are 3Gbps, and they support RAID 0, 1, 5 or 10. The solid state RAID 0 array was attached to the 6Gbps ports, and we know this because Origin used grey-tipped cables to differentiate them from the hard drive and Blu-ray drive cables — it's another nice little detail about the build that we like.

You might be hard-pressed getting any more expansion cards to fit on the motherboard though. The two graphics cards that occupy the PCI Express x16 and x8 full-sized slots are double thickness and render a couple of the slots useless. However, there is a free PCI Express x1 slot above the first graphics card, and there is a PCI Express x4 slot free below the second graphics card. If you use this slot, you will restrict the graphics card's airflow. If you want to add Wi-Fi, a digital TV tuner card or a new sound card, we'd recommend going for USB variants instead of internal ones — there are definitely enough USB ports.

On the rear port cluster, you get six USB ports, as well as eSATA, optical audio output and analogue audio ports (running off a Realtek ALC892 8-channel codec). You also get a Gigabit Ethernet port that runs off an Intel 82579 controller. Four more USB ports and audio jacks are located at the top of the case (which is a great position for them to be if you rest your case on the floor rather than on a table), but none of these particular ports are USB 3.0. The only two USB 3.0 ports on the system are located on the rear (running off an ASMedia controller), which can be inconvenient. The motherboard has an internal header for USB 3.0 ports, but because the case itself doesn't have USB 3.0 ports at the front, it has not been used. 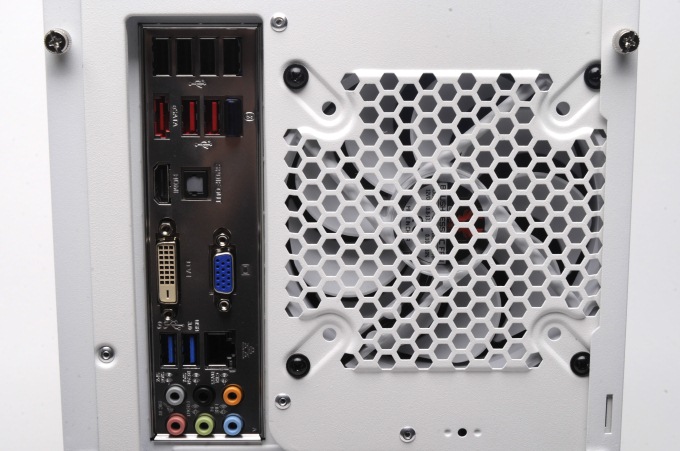 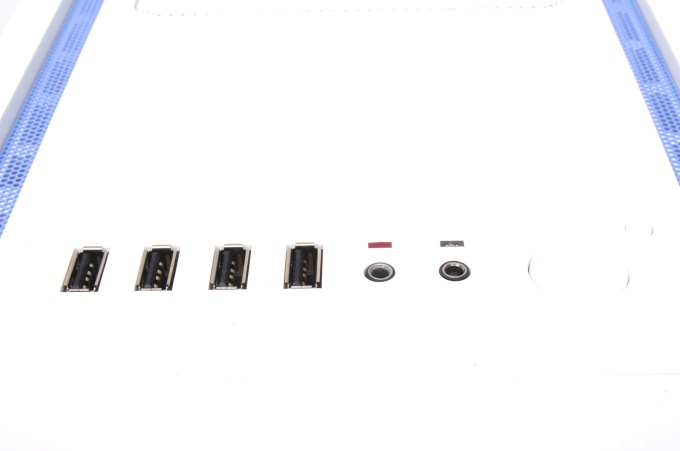 Priced at $2499 without a monitor or peripherals, the Origin might seem to be a little expensive during a time in which we're well conditioned to buying computers that cost well under $2000, but it has components that are fast enough to serve gamers and power users for at least the next couple of years, and you won't have to build it yourself! The build quality of the machine is stellar, both in terms of how it has been put together (with lots of attention to detail) and also in terms of the components that have been used. The fact that it's a good looking machine also helps. The only downside is that Origin hasn't enabled USB 3.0 ports at the front of the case, so you'll have to reach around if you want to use USB 3.0 hard drives. Overall though, it's hard not to love this machine.