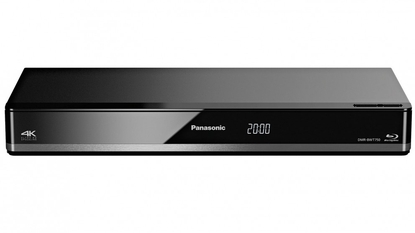 The player is pointless as it's the same price as the equivalent recorder. The recorders are complex to use and expensive but they do allow the creation of DVDs and Blu-rays without a computer. Otherwise there are better options available.

While Personal Video Recorders (PVRs) are a shrinking market, there is still a high demand, especially from people with poor internet connections and limited access to cable TV. In such instances you ideally need access to Free-To-Air (Freeview) channels that are accessed by an antennae and a set-top box - one which, like these devices, gives you the ability to easily see what’s on, record TV in a single button press, pause live TV, watch one channel while recording another and schedule recordings (with series link). These Panasonic devices also have Blu-ray players built in while two of them will allow you to record content onto optical discs too... under certain circumstances.

The devices themselves look identical and are typical brown goods in that they will fit in to a living room environment relatively inconspicuously. We do feel that Panasonic’s 6-digit LCD digital readout is a bit old and impractical though. On the one hand it’s less obtrusive and distracting than a full LCD screen but it’s so narrow that full messages can’t be displayed at once – you have to wait for long words to tortuously scroll slowly across.

Initial set-up immediately offers a channel scan and all channels get laid out sensibly with duplicates being automatically removed. Pausing live TV is instant but it’s a bit fiddly when you want to get out of it and there’s a bit of lag when you want to rewind it – you’re better off using the ‘Back 10 seconds’ and ‘Forward 60 seconds’ buttons on the remote.

You don’t need an internet connection to access the TV listings (they’re broadcast over the air thanks to the HbbTV – Hybrid Broadband Broadcast TV system that comes in the form of FreviewPlus in Australia) and if you want to set a manual timer to record old-school-VHS-style (for whatever reason) that can be done too. You can also automatically record programs by entering keywords.

You need to press Stop to escape from a delayed TV stream before you do anything else. This might be annoying initially but it means you can’t accidentally change channel and lose access to all the buffered TV you were about to watch – one of the most infuriating things that can happen to a human being.

In addition to a Blu-ray drive, the devices can also play content from SD cards and USB drives. The former may be useful to those with Panasonic camcorders who have plenty of video (AVCHD) content on SD cards (especially if you want to transfer them to DVD/Blu-ray and send them off to granny). It can be a bit fiddly and you’ll need to scrutinise the manual but you can edit video, set DVD chapters and create titles all without using a separate computer.

The units are also DLNA certified meaning that you can access and playback content on your home network too (assuming those devices are compatible).

The remote has large buttons and is responsive. It’s reduced in size compared to regular Panny TV remotes and a bit less hieroglyphic. However, there are at least four different menu groups which can be a regular cause of confusion. They can also take an annoying amount of time to load up.

We do like that there’s a dedicated Netflix button.

In terms of other features, there’s a Quick Start Hours setting which lets you put the units into an extended, power-saving sleep at certain hours (when you’re at work or asleep). This means that the device will start-up much quicker at the expense of power consumption when you want it to at other times. You can also use Miracast to stream from your mobile device (if it supports that).

The units all upscale to 4K Ultra High Definition and we’re impressed with the quality. If you watch a great deal of standard definition TV on a large, high-definition screen it can look ugly, but Panasonic’s upscaling has always been very good so this might make bad performers (like old Samsung TVs with lousy upscaling) look better. Full HD TV looks very good and sharp too and naturally Blu-ray is as crisp as we’d hope. Nonetheless, it’s worth remembering, for the most part, quality will be far more influenced by your TV than the PVR. Also, remember that these units will not play the new 4K Ultra High Definition Blu-ray discs.

When the front flap opens, it reveals the disk drive, SD card slot and a regular USB port (if you’re connecting a USB hard drive you’ll need to USB port at the rear because it provides more power to the device). At the rear there’s also HDMI, coaxial S/PDIF, RCA connectors, Ethernet (WiFi is also built-in) plus RF in and out. We were hoping that the latter meant people could record from VHS and copy to digital video but unfortunately it doesn’t. This would have been great for legacy users to transfer over old wedding/family videos and the like.

These devices have one foot in the past - for people who aren’t quite ready (or more-likely) able to fully embrace the age of internet-heavy digital video (or who don’t have a computer to perform even basic video editing).

In terms of pricing, they’re not cheap. The 500GB DMR-BWT460GN costs $500 while the 1TB DMR-BWT760GN costs $600. The DMR-PWT560GB (which only plays and doesn’t record discs) also costs $500 and subsequently isn’t worth bothering with: choose it's superior sibling instead.

If you really need the ability to record to DVDs and Blu-rays then this may represent good value (if you can handle the complex menus and operations) but those formats are dying out now. It’s also worth noting that you can’t copy or record movies and then transfer them to other media as the Digital Rights Management (DRM) means that TV and disc-based films are locked down - the units only really work with home movies.

If you’ve this much money to spend, most people would be better off buying the $300 Fetch TV Mighty as a set top box and a 4K Blu-ray player for the same amount, that way you’ll get a far superior set-top box experience with a full gamut of online abilities plus the ability to watch 4K Blu-rays. If you just want Blu-ray and DVD playback without recording, then a decent Blu-ray player costs under $100 these days.