Panasonic delivers the world's first portable Blu-ray player, but it's not without its flaws 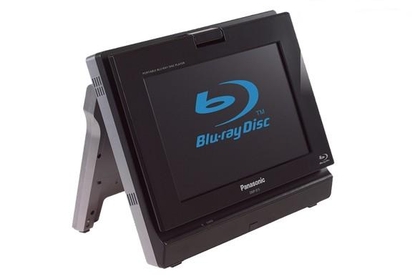 Ironically, the Panasonic DMP-B15 works better as an in-house Blu-ray player than a portable one. While there are things to like about the DMP-B15, the device is simply too expensive to overlook its flaws.

The Panasonic DMP-B15 is the world’s first portable Blu-ray player. It combines an 8.9in LCD screen and a BD optical drive in a (semi) portable package. It also doubles as a player for the home, complete with YouTube functionality and BD-Live support — not too shabby for a portable device. While the inclusion of HDMI and Ethernet is to be commended, the DMP-B15 is simply too expensive to wholeheartedly recommend. It also comes with a cavalcade of flaws, including short battery life, a bulky size and underwhelming display resolution. Nevertheless, if you’re looking for a Blu-ray player that can be taken abroad, this is currently your only option.

The first thing we noticed about the Panasonic DMP-B15 was its size. Weighing in at 1.7kg and measuring 58.7x256x202mm, it is substantially larger than any portable DVD player we’ve tested, including ancient models such as the Panasonic DVD-LS87 and Grundig DVD P7004. When compared to modern beauties like the LG DP392G, Panasonic’s baby looks very chunky indeed.

Despite its girth, the DMP-B15 Blu-ray player is a very attractive looking gadget. The black-and-silver finish has the premium glossy sheen you’d expect from a Blu-ray device. Unfortunately it’s also susceptible to fingerprints, though this is nothing a quick wipe of the sleeve won’t remedy. The design is pleasingly versatile, with a swivelling tablet-like display that rotates 180 degrees and an inbuilt stand. This allows you to use the DMP-B15 on your desk, lap or car seat with equal ease. (A headrest mount and power adaptor are included for in-car use.) The DMP-B15 looks best when propped on its stand; it could almost pass for a digital photo frame, which happens to be one of its secondary functions.

One of the things we love about the Panasonic DMP-B15 is its interface. All of the major buttons are included on the device itself, including a miniature directional stick for menu navigation. This is just as well, as the included remote control is tiny and very easy to lose.

We were pleasantly surprised by the connectivity options offered by the DMP-B15. Instead of getting by on the basics, Panasonic has loaded the device with a full suite of connections, including an SD memory card slot, Ethernet and HDMI ports, a microphone jack and an AV video output (the only thing missing is a USB port, but we suppose you can’t have everything). The HDMI and Ethernet ports are especially noteworthy. They will let you connect the device to a high-def television and enjoy the full functionality of a Panasonic Blu-ray player — including access to YouTube, Picasa and BD-Live features. If you own more than one HDTV, the ability to quickly transport the player from room-to-room is also enticing.

To test the DMP-B15’s home player credentials, we hooked it up to a Samsung Series 8 (UA46B8000) LED TV and were very impressed with the results. In addition to playing Blu-ray movies, the Panasonic DMP-B15 can upscale DVDs to 1080p, just like a regular Blu-ray player. We didn’t notice any discernable difference between the DMP-B15 and Panasonic’s top-of-the-range DMR-BW850: both models boast crystal-clear image quality with minimal over-sharpening. The only downside is the lack of 7.1 channel support.

So far, so good. However, the Panasonic DMP-B15 is a portable device first and foremost, and this is where it begins to stumble. As mentioned, the unit is quite large and bulky, which makes it a bit of a hassle to lug around. It’s definitely not something you can toss in your bag for a train trip. We were also disappointed by its battery life. In our battery rundown test, the DMP-B15 held out for 2hr 32min. While this will get you through most feature-length movies, it’s still fairly short-lived compared to portable DVD players. By contrast, the Toshiba SD-P91SKY boasts a battery life of over five hours.

But most damning of all is the DMP-B15's native resolution: at 1024x600 pixels, it is well below the 1920x1080 offered by Blu-ray media. While the 8.9in screen is perfectly serviceable and does a good job of warding off reflective glare, the lack of Full HD resolution is galling. It essentially takes away the only reason for owning Blu-ray technology. That said, our Blu-ray movies did look superior to regular DVDs when played on the device — but the difference was pretty minimal.

It cannot be denied that the Panasonic DMP-B15 is a one-of-a-kind product. Whether this makes it innovative — or merely misguided — is debatable. Just what kind of insanely diehard videophile requires Blu-ray movies on the road anyway? The whole concept seems a trifle unnecessary, especially when the screen doesn’t output to 1080p. For around the same price, you could buy yourself an all-purpose notebook and fill it with scores of movies — in Full HD, no less. Consequently, only the most dedicated and wealthy Blu-ray fans should consider the Panasonic DMP-B15.