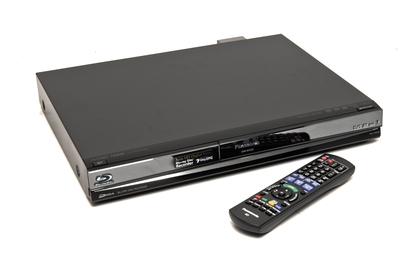 If you can afford it, the Panasonic DMR-BW500 is a wonderful addition to any high definition home entertainment setup. It offers dual HD tuners, a 500GB hard disk and Blu-ray writing capabilities making it a perfect all purpose device.

Announced just moments ago, Panasonic's DMR-BW500 is Australia's first standalone Blu-ray recorder. Featuring a drive that both reads and writes Blu-ray discs, as well as a 500GB hard disk and two high-definition digital tuners this device is well suited to becoming the centrepiece of high-definition lounge rooms across the country. Although it carries a hefty price tag, it fulfils several roles at once and is a great option for users looking to make the jump to Blu-ray.

The pairing of the 500GB hard drive with the Blu-ray writer is really the key selling point of this unit. Allowing users to record content then back it up to high capacity media is a big boon, as it makes it basically impossible to run out of space. There are several recording modes. DR is the main one: it records in the same quality as the broadcast (be it SD or HD) and you can get up to 62 hours of footage at this setting on the hard disk (three hours on a 25GB BD-R). Then there are an array of others such as XP, SP and EP that range from 110 hours to 887 hours on the HDD and five hours to 42 hours on a BD-R. Users can also write footage at these three quality levels to a variety of DVD formats such as DVD-RAM and DVD-R.

In our tests the quality of the recorded footage was excellent. Even when capturing the HD broadcast television channels everything looked clear and sharp when recorded in DR. As mentioned earlier, footage that has been written to the HDD can be subsequently copied to a disc to make more space. Our test recording was 11 minutes of footage that occupied 2.8GB on the HDD. It copied across in a little over five and a half minutes, which isn't fast by normal standards, but is fine considering the quantity of data involved.

As two high-definition digital tuners are included, you can record two programs at once. If running an aerial connection through your television as well, you could even watch a third while recording the other two. You can also split the recordings, writing one to the HDD and one to BD-R.

The DMR-BW500 comes with a built in seven-day electronic program guide (EPG) that makes scheduling recordings a breeze. Functioning much like a media centre guide, you can see a grid outlining what is on right now and what is coming up and pick programs to record. You can also do nifty things like setting it up to record a particular program each week. The EPG worked relatively well but not perfectly; at times we could only browse a few hours ahead on the schedule and it seemed fickle when updating.

Another cool feature of this unit is Viera Link, which lets you use your television remote control to access most of the player's functions, assuming you have a Viera television. It works pretty well for the most part and allows for one particularly awesome function: pausing live TV. Activating this feature will automatically switch on your DMR-BW500, flick it to the appropriate channel, change your TV over to the player and then pause the tuner effectively letting you pause, rewind and fast forward television.

All the standard connectivity options you'd expect are there, including HDMI, component RCA, optical and co-axial. The output when running a Blu-ray film through the HMDI 1.3 connection was stunning; this unit definitely produces some of the best image quality we've seen. It also supports all the latest sound formats including Dolby TrueHD and DTS-HD.

The design of the DMR-BW500 is a pretty standard for a home entertainment device, with a relatively slim boxy design that looks quite stylish. It has a small flip-down panel at the front that hides some basic controls, as well as an SD card slot and USB port.