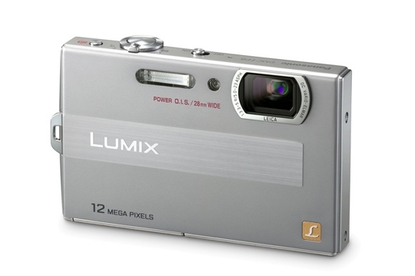 Though the lens placement and button layout take some getting used to, the boxy and durable Panasonic Lumix DMC-FP8 offers a quiet and quick wide-angle lens.

The durable and compact Panasonic Lumix DMC-FP8 point-and-shoot camera offers an ultraquiet, recessed lens that focuses very quickly, but you'll need to make sure that its design works for you.

The 12-megapixel Lumix DMC-FP8 has a boxy but stylish frame, made out of metal and seemingly impervious to anyone with a mild case of fumble-itis. However, though the camera build is durable, the 4.6X-optical-zoom wide-angle lens (28mm to 128.8mm) is prone to scratching or damage if you put the camera in a bag or purse. The lens is recessed into the faceplate, but since the camera has no slide-over lens cap, the glass is left unprotected.

The position of the lens might also be a drawback for two-handed shooters: It's in the upper-right corner of the front panel, so your left index finger may creep into the foreground of some shots.

Otherwise, the lens is superb, for a few reasons. The folding optics that Panasonic has used allow for not only a compact design but also an extremely quiet zoom lens. It offers quick, silent autofocus for both stills and video; on all of my test shots, the autofocus popped into focus immediately instead of searching in and out.

The nonprotruding lens also allows the design of the camera to be evenly weighted and square, which means you won't need a tripod for many casual shots. The camera rests square on a table or on any even surface, which is helpful for slow-shutter and self-timer shots.

The dead-quiet zoom comes into play during video capture, too, as the lens motors aren't audible in your clips. The Lumix DMC-FP8 shoots 720p MPEG-4 video at 30 frames per second, and the video quality is more than satisfactory for sharing clips via YouTube or other online video services. The camera has no HDMI-out port, but you can play videos back on a TV set with the included component cable.

Reflecting a growing trend for Panasonic's Lumix cameras, the DMC-FP8 offers instant one-touch access to Intelligent Auto mode by way of a button that resides next to the shutter and zoom controls. In addition to optimising the in-camera settings based on the scene you're shooting, Intelligent Auto mode switches on the camera's optical image stabilisation.

Stabilisation did the trick for most shots, but it was a bit disappointing at full zoom; moving the camera slightly while taking a shot resulted in a blurred image.

In PCWorld Labs imaging tests, the Lumix DMC-FP8 produced good--but not great--results. Its strong suits, by far, were the sharpness and the lack of distortion in its test images. Its colour accuracy scored lower than that of similarly priced competitors, as did its overall image quality in comparison with rival point-and-shoot cameras. Overall, the DMC-FP8 earned an image-quality score of Good.

In my hands-on casual tests, the DMC-FP8 did surprisingly well in two specific scenarios: at high-ISO levels and in macro mode. I was able to take shots at ISO 1600 without much noise appearing in the resulting shot, and I could practically touch the subject with the lens and get a clear macro shot.

In Intelligent Auto mode, the camera did a good job adjusting between lighting in scenes, as long as the scene changed from a darker environment to a lighter one. When I moved from a well-lit room to a darker locale, the exposure levels stayed a bit dark.

As for scene modes, the camera has 28 selections available via a dedicated mode button on the back. In addition to the usual suspects--Portrait, Panorama Assist, Sunset, and the like--you also get a few unique options, such as High Dynamic mode (which works well in boosting colors and details in shadowy areas, but at the expense of image sharpness), Starry Sky mode (a slow-shutter mode that lets you take a 60-second exposure), and modes that simulate a pinhole camera and grainy film.

Menu navigation is a bit different. Instead of a standard-issue directional pad, you use light-up buttons on the back of the camera. While the illumination helps you locate the buttons in the dark, their text doesn't light up--you still need to know what each button does. The setup would be more intuitive, too, if the Select button for menu options were in the middle of the crosshair of buttons; instead, it's the top-right button above the four-button cluster.

Battery life is a major plus: In PCWorld Labs testing, this camera took 392 shots on a single charge of its lithium ion battery, good enough for a battery life rating of Superior.

The Panasonic Lumix DMC-FP8 is a durable, stylish point-and-shoot camera that performs well. The ultraquiet lens and fast autofocus are huge draws, but the lens placement and controls may annoy some people.