A hybrid digital camera that's a glutton for punishment. 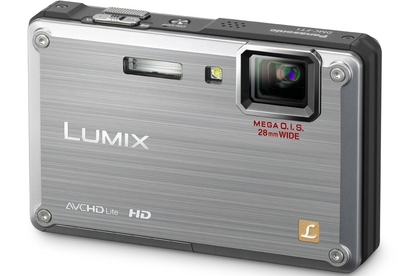 The Panasonic LUMIX DMC-FT1 is a rugged camera that's ideal for outdoor adventurers. However, the pre-production model we tested was a little slow and it didn't take great shots while underwater. It will perform well as a video camera, so it's a decent hybrid model for those of you who also want to get into motion pictures.

Joining Olympus as the only other well-known vendor with out-of-the-box tough cameras, Panasonic is hoping its LUMIX DMC-FT1 will gain traction with outdoorsmen (and women) when it's released in April. It's a waterproof, dustproof and drop-proof compact camera. With the ability to record high-definition video at up to 720p, the Panasonic LUMIX DMC-FT1 is a great hybrid for demanding users who want good still images as well as the ability to take high quality video.

In a hands-on session at Sentosa beach in Singapore, a pre-production Panasonic LUMIX DMC-FT1 stood up to some harsh treatment in the surf and sand; however, it wasn't perfect. Grains of sand eventually got under the 5-way controller buttons, zoom slider and the dial. The left and right buttons of the 5-way controller worked intermittently after their brush with beach, while the zoom slider crunched and the dial became very hard to move. After repeated pressing and sliding, the buttons and slider became more functional. According to Panasonic these problems should be ironed out eventually — as our pre-production model was hand-made (and as a consequence very expensive).

Using the camera underwater, we found its picture quality suffered due to lack of light. Using it in an indoor pool will probably not yield the best results, but outdoor pools and snorkelling adventures should produce clearer shots as there should be more light in these environments. The Panasonic LUMIX DMC-FT1 has a 28mm, 4.6x optical zoom lens with a 12.1-megapixel sensor, and it works best in Intelligent Auto mode. There aren't any manual settings to play with, but its scene modes are handy and should be used when shooting at night or indoors.

Shooting video underwater showed us that the Panasonic LUMIX DMC-FT1 is much better suited to this task than still images, as plenty of light gets into the lens in video mode. It produced vibrant, clear and smooth video at 720p, using the AVCHD codec, and software is supplied to convert its videos to DVD and also to prepare them for uploading to YouTube.

Autofocus tracking is part of the feature set and it works very well, tracking an object that's within range on the frame. It was accurate during our tests, except when the object got closer or further away from the lens. For example, when the object became too big in the frame, the focus point shifted to only one portion of the target or it was lost altogether.

Physically, the LUMIX DMC-FT1 does not look like a camera that can withstand too much pain. Its dials and buttons look and feel normal (when they don't have sand in them) and its 2.7in screen can be used to frame your shots. It has a square shutter button and a zoom lever that slides left and right, which can be a little disorienting the first time you use it; its zoom lens is concealed within the body of the camera. Rubber seals on the battery/memory card and video out compartments ensured that no water got into these areas. In fact, after leaving the camera in the surf for a while (making sure the waves didn't carry it off the beach), and then drying it off, we found only a couple of grains of sand and sprinkles of water on the outside of the rubber lining. Our SD card survived!

Dropping the camera from 1.5m onto hard wood, playing catch (and drop) on the beach and inadvertently banging it into concrete walls did nothing to compromise its structure or ruin the LCD screen. The only thing we neglected to do was test it for scratches, especially around the lens area. We'll be sure to test this when we get our hands on a production model.

In broad daylight photos taken with the Panasonic LUMIX DMC-FT1 were a little over-exposed and the highlights in our shots were blown out. While it still managed to get the majority of the scene in relatively good colour and definition, pointing and shooting without checking to see if your object is backlit could result in some poor shots. Shoot with the sun at your back, unless you're trying out something arty or simply can't afford to miss an opportunity.

Speaking of opportunities, for a camera that is aimed at outdoors adventurers and beachgoers, our pre-production Panasonic LUMIX DMC-FT1 was slow to start up and slow to shoot. This is something that will hopefully be addressed in the firmware by the time the production units reach store shelves in April, as it won't be fun if you're underwater shooting fish and can only get off one shot every few seconds.

Elias Plastiras flew to Singapore as a guest of Panasonic.