The new Panasonic LUMIX DMC-LX5 makes several improvements to the old flagship LUMIX DMC-LX3. It's an expensive product but the specifications look great -- we're keen to do some in-depth testing.

The LUMIX DMC-LX5 digital camera is the new top dog in Panasonic’s compact digital camera line-up, taking over from the Panasonic LUMIX DMC-LX3. It has a host of new specifications and features that should make it a superior camera to its predecessor. The DMC-LX5 will hit Australian shores in September, and we're looking forward to putting it through our paces in our Test Centre. 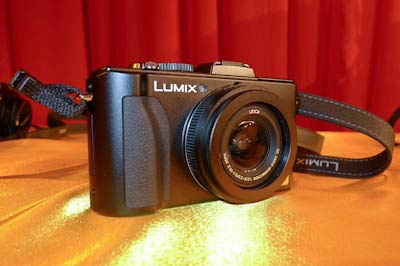 The new Leica DC Vario-Summicron lens of the Panasonic LUMIX DMC-LX5 boasts a 3.8x zoom range, with a 35mm-equivalent focal length of 24-90mm. This offers an extra 30mm reach over the LUMIX DMC-LX3’s 24-60mm focal range, but thankfully the new lens is equally as bright — maximum aperture at 24mm is f2.0 just like the LX3, and the 90mm’s maximum aperture is still a relatively fast f3.3. The aperture of the LUMIX DMC-LX5’s 60mm mid-point remains at f2.8, again like the LX3.

We noted that the LUMIX DMC-LX3 had a relatively short zoom range when we reviewed it. The LX3 was an excellent landscape and group photo camera, but the LX5’s extra zoom length should make it a better choice for impromptu portraiture and general purpose use. An extra bit of zoom is never a bad thing!

The Panasonic LUMIX DMC-LX5 has the same gross pixel count as the earlier DMC-LX3 — just over 10 megapixels, with a maximum 4:3 image resolution of 3648x2736 #8212; but the 1/1.63in sensor has been redesigned for significantly higher sensitivity and dynamic range. Panasonic quotes improvements of 31 per cent and 38 per cent respectively for sensitivity and saturation, which should translate into sharper images with more detail in highlights and dark areas. Panasonic's claim that images will be ‘noiseless’ is a bit rich — the sensor inside the LUMIX DMC-LX5 is still much smaller than the one inside a camera like the Panasonic LUMIX DMC-G2 or Canon EOS 550D — but a newer and more powerful image processor should mean that JPEG images are cleaner and more detailed than those taken with the LUMIX DMC-LX3.

The new processor allows for faster start-up and shutter times, as well as quicker autofocusing. A new Intelligent Resolution feature analyses images to determine detail, edge and out-of-focus areas and adjust processing and compression accordingly — this should translate into slightly better detail in high ISO images, such as those captured in dim lighting.

The Panasonic LUMIX DMC-LX3 didn’t have the processing power to compress its 720p high-definition movies on the fly, resulting in very large QuickTime Motion JPEG files. The LUMIX DMC-LX5 can save its movies in the popular AVCHD Lite format, which significantly cuts down on movie file sizes while maintaining good quality levels in video. The LUMIX DMC-LX5 also lets users manually control shutter speed and aperture settings, allowing for extra creative control. After recording, simple movie editing features are available in the camera for viewers to cut out unwanted scenes. 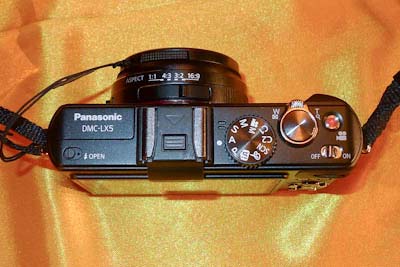 The Panasonic LUMIX DMC-LX5's controls are largely the same as the DMC-LX3's, but a new jog dial allows easy adjustment of incremental settings without requiring multiple button presses. The aspect ratio switch on the camera’s lens barrel housing now includes a 1:1 ratio for square shooting, and a moulded grip on the right side of the camera makes one-handed shooting easier.

The Panasonic LUMIX DMC-LX5 follows the same basic formula as the excellent LUMIX DMC-LX3, which earned high praise when we looked at it two years ago. The new LX5 makes significant improvements in some areas, and we’re definitely keen to get our hands on it for some in-depth testing.