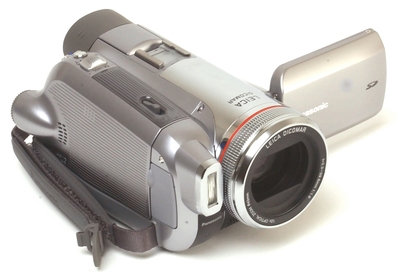 A MiniDV video camera that sits right at the top of the consumer camcorder ladder.

On top of great quality video the Panasonic NV-GS500 MiniDV video camera also produces still images of a respectable 4 megapixels, even allowing images to be saved while simultaneously shooting video.

The three CCD GS500 manages excellent colour differentiation and magnificently sharp details with little noticeable distortion and no sign of compression. Focusing on passing cars resulted in no stuttering or jerkiness, unlike some other models we have tested. Zooming in on the fine details of leaves produced solid edges with no fringing.

Other standard video features include night shot, wind reduction and a stereo microphone. Once again, as with other recent Panasonic models, we were thoroughly unimpressed with the night shot feature. Although the video is made much brighter, the corresponding drop in frame rate is a big disappointment. This is but a minor complaint considering how good the quality of the video is in regular light.

Despite having a wide range of features, using the camera is relatively simple. Panasonic has stuck to their tried and tested function selection dial with a five-way navigational stick in the centre. Using this it's possible to breeze through the simple two-level menu which contains almost all the available functions. This menu is displayed on the GS500's attractive 2.7 inch 16:9 widescreen LCD. Like all Panasonic's new video cameras the screen is of high quality and is even visible in direct sunlight. The viewfinder is also well designed and can flip out at two angles for ease of use.

The camera is large with a slightly cumbersome frame and is also relatively heavy. It's worth bearing in mind that if portability is your main criteria then the NV-GS500 isn't the ideal purchase. Panasonic has included 12x optical zoom, which although far from being the highest powered around, does a good enough job. Despite the bulky frame, holding the camera is comfortable with the main functions within easy reach. Battery life is a little disappointing at roughly an hour.

We were impressed when we transferred the footage to a PC. Panasonic include all the necessary components including a USB 2.0 cable and the easy to use, yet bizarrely titled, "Sweet Movie Life" software. Video is encoded in true 16:9 widescreen and was of exceptional quality when played back on a PC. There were no telltale signs of compression or a corresponding drop in frame rate. Panasonic also bundle MotionDV Studio 5.6 LE for editing videos. Firewire is supported but the cables for this aren't included.

While the GS500 still falls a long way behind the best still image cameras, its 4 megapixel sensor can definitely compete with products in the low-end section of the still camera market. The good quality images have decent colour reproduction, only minor flaws and are backed up with a full range of manual features and a flash. White balance, shutter speed and aperture priority modes are all included. On top of this, Panasonic has included an easy to use focus ring, akin to those found on SLR lenses and far better than a simple button. Another great feature is the ability to save images at the same time as shooting video, though this is only available at a one megapixel resolution. Images are saved to an SD card.