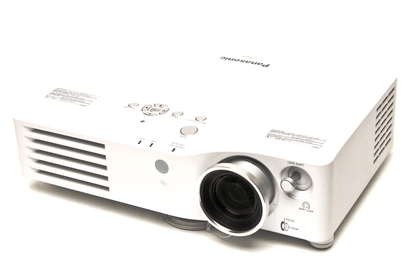 Panasonic's PT-AX200E projector is great for both viewing data and movies thanks to impressive image quality and unaltered colour reproduction, but lacks Full HD output.

Replacing its predecessor, the PT-AX100E, Panasonic's new home entertainment projector the PT-AX200E adds a second HDMI port, and a game mode to increase signal response during fast motion video. While it has fantastic image quality and adjustability, it can't play 1080p content and is one of the larger, heavier projectors in its class.

The projector itself weighs almost five kilograms and has a matte white finish that is adequate but a little plain. Measuring 395x300x112mm, it's not marketed as a portable model. The focus and shift of the PT-AX200E's lens are adjustable on the front of the unit, with the power and some menu buttons accessible on the top. As usual a variety of inputs are available on the rear – namely two HDMI ports, component, composite, VGA and S-Video. The PT-AX200E also includes a removable lens cap which is constantly attached to the lens, though when adjusting the projector's orientation with the cap off it gets in the way.

Using the front controls we were easily able to tune the image to an acceptable size and focus. The vertical lens shift feature is useful, though it's not adequately changeable when the throw distance is two metres or less. A finely-adjustable vertical keystone compensation setting does allow for the projector to be mounted at a different height to the screen, which is a great feature for permanent table or roof-mounting.

As mentioned earlier, one of the key improvements Panasonic has made this time around is the inclusion of the game mode which increases the signal response in order to easily display a smooth frame rate for games. The game mode also tweaks gamma and contrast settings to display more game detail in dark areas on the screen. It made a noticeable improvement when gaming in our tests and should please console enthusiasts seeking big screen action.

Although Panasonic markets this as a high-definition projector, users should note the unit is only able to display 720p content, rather than the 1080p full high definition that is becoming available. The image quality when operating at 720p is spectacular – it was crisp and sharp, with no noticeable graininess or artefacts, and smoothly handled downscaling from 1080p. Meanwhile the colour balance was rich and vibrant but not over-saturated. Skin tones looked natural, and the greens and blues of landscapes were displayed vividly with no colour bleeding. When viewed in a dark room, blacks and grays were faithfully reproduced. The default colour settings are slightly cool, with adjustability offered in the form of seven preset picture modes. There are also several useful advanced options for tweaking, including a luminance sensor to automatically alter the image based on ambient light.

The PT-AX200E is the brightest in its class, with a claimed rating of 2000 lumens. We tried viewing the picture under direct light, and found that while detail was lost, the image was still evident and video could be viewed. Under normal watching conditions the unit became quite hot after an hour, with the fan expelling consistently warm air. It's quiet during operation, and the fan is inaudible except during periods of silence.

If you don't need 1080p video playback, and don't need a small unit, Panasonic's PT-AX200E, with its simple finish is a good choice at a reasonable price.