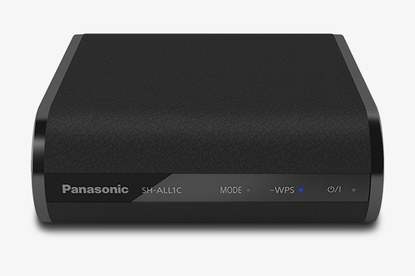 The SH-ALL1C forms part of Panasonic’s multi-room audio product portfolio, which also includes speakers such as the SC-ALL8 and SC-ALL3. It’s not a speaker on its own, but instead can be used as an interface to connect your existing Hi-Fi to your home network.

It’s a nondescript box with a width of 132mm, a depth of 142mm, and a height of 51mm, and it features optical and analogue output on its rear to facilitate the connection to your stereo system. Networking can be by way of 100Mbps Ethernet or Wi-Fi, and it supports both 2.4GHz and 5GHz networks.

Qualcomm’s AllPlay is the standard that is used to play music through the speaker over your network, and this works in conjunction with an app that can be used through your smartphone or tablet. In order to play music through this device on your stereo, you need to have songs stored on your mobile device, or a music server set up on a computer or NAS (network attached storage) device.

To set up the SH-ALL1C on your wireless network, you must first connect it to your stereo system, using either optical or analogue (RCA) connectors, and then power it on. The device will emit its own wireless network. Use your smartphone or tablet to look for this wireless network (it will feature the name AllPlay) and connect to it. Once connected, launch your Web browser, and you will then automatically be taken to a settings page where you can enter the details for your wireless network.

The device also supports WPS (Wi-Fi Protected Setup), which should theoretically allow the device to join your wireless network simply by pressing the WPS button on the device and your router, but we found the manual connection process to be more foolproof.

Once the SH-ALL1C is connected to your network, you will be able to use an app on your phone to find music on your network and play it through your stereo. The app that Panasonic recommends is called Panasonic Music Stream, but we found it to be unreliable during our tests, with some stability and speed issues, as well as an inability to see files from one of the music servers on our network (even though it saw the server).

Instead, we used the AllPlay Jukebox app for our tests, which is the bare-bones app for Qualcomm AllPlay devices. It worked a treat with this device, allowing us to browse through all of our music servers and add music easily to the app’s main playlist. The quirk of this app is that it doesn’t play music sequentially in a folder, but instead plays one track at a time (adding it to the main playlist) unless you tap on the ‘play all’ option at the top of the file list. The main playlist can’t be edited, only cleared.

We were able to play all our MP3 and FLAC files through the Jukebox app without any issues, and the thing that we noticed about this device is that it can also output high-resolution audio files to a compatible amplifier. A similar product that we tested, Lenco’s PlayConnect, was not able to play high-resolution files, but instead down-sampled them to CD quality (44.1kHz). The Panasonic SH-ALL1C was capable of outputting 96kHz and 88.2kHz tracks, as reported by our Rotel RA-11 amplifier.

When we compared the output of the high-resolution files to standard CD quality versions, it was impossible for us to tell them apart, and on blind, random testing even selected the CD quality version as being the superior one at times. However, if you are heavily into high-resolution music, or want to start getting into it, just so that you can have the best quality music to showcase on your Hi-Fi, then the Panasonic will oblige.

As it’s just a Wi-Fi device, you are bound mostly to the app in order to play music, so you can’t just play anything. It’s mainly for playing music from servers on your network, or stuff stored locally on your mobile devices, but it can also support Spotify, and there is scope for listening to Internet radio via the AllPlay Radio app. You miss out on being able to play other services, such as Google Play Music and Bandcamp, for example, unless you have downloaded all your purchased tracks from these services and have them stored locally.

Bluetooth would make a good addition to this product, as it would give it the versatility to play anything from your mobile devices via a direct connection. But the aim of this product is mainly to be a bridge between your Hi-Fi and the rest of your network, allowing your Hi-Fi to join a multi-room speaker set-up either using Panasonic’s own AllPlay-based speakers, or AllPlay-based speakers from other brands.