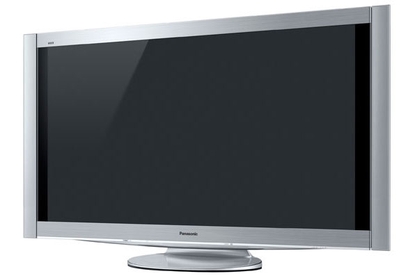 Panasonic's TH-P54Z1A plasma television is the pinnacle of 2009 plasma television design. It's only an inch thick, and it has wireless Full HD 1080p streaming and a very high quality plasma panel. Apart from its wallet-bashing price tag, the Panasonic TH-P54Z1A is a great unit.

The Panasonic TH-P54Z1A is a 54in plasma television with an inch-thick chassis, wireless Full HD video streaming and a high quality 1080p panel. It is very expensive but if you're looking for an elegant alternative to a super-thin Samsung LED screen, this should be at the top of your list.

The Panasonic Z1A series only includes the 54in TV; it's Panasonic's flagship NeoPDP panel for 2009. Despite its thin body, the Panasonic TH-P54Z1A is not light. A fully metal chassis, brushed metal fascia and heavy stand means the television weights 38kg; you'll want a friend to help move it around. With the stand removed it's a great candidate for wall mounting as it's both thin and exceedingly stylish.

Unfortunately the wireless receiver that plugs into the back of the Panasonic TH-P54Z1A is not as brilliantly designed as the TV. Sony's Bravia KDL40ZX1 has a receiver integrated into the panel, but Panasonic uses a rounded external unit. It doesn't look too outlandish but we would have preferred a sleek and metallic receiver that matched the TV better. It communicates wirelessly over the 60GHz band with the TV tuner/transmitter unit, cutting down on the amount of circuitry inside the television itself.

The majority of connections are made through the receiver, so there's no need to place your home entertainment equipment near the panel itself. Four HDMI ports, four composite A/V inputs, two S-Video and component inputs and a D-Sub (VGA) video connector let you connect a veritable armada of home entertainment technology.

The TH-P54Z1A has a dynamic contrast ratio of over 2,000,000:1 and an impressive 40,000:1 figure for static contrast. It's a Full HD 1080p screen with 6144 steps of gradation. This is fewer than the 7160 offered by the jaw-dropping Panasonic TH-65VX100W but still high enough to imbue the TH-P54Z1A with great colour gradation, even in difficult scenes. Cheaper panels might show banding in a sunset, for example, but this Panasonic panel produces smooth and consistently clean images.

We didn't experience any issues whatsoever with the wireless HD transmission from the TV tuner box to the receiver. Whether it was 1080i broadcast television, a standard 576p DVD or a high quality 1080p Blu-Ray movie, footage was clean, full of detail and didn't display any motion artefacting. Audio is also transferred to the high quality stereo speakers hanging off the side of the screen — these are surprisingly versatile for thin units, producing crisp high notes as well as detailed mid-range and a small amount of mid-bass. You can have the TV up to 10 metres away from the transmitter.

The Panasonic TH-P54Z1A handled our image tests brilliantly. We ran through the darkest scenes of Batman Begins and The Dark Knight to test the plasma panel's contrast ability — almost flawless, of course — and we were equally impressed with the sharpness, vibrant colour and detail visible in WALL-E and Ice Age.

Unfortunately, the Panasonic TH-P54Z1A doesn't perform so brilliantly in the power consumption stakes. Netting a mere two stars from Australia's energy rating body, the panel consumes 348 Watts during normal usage, with an active standby consuming a puzzlingly high 28W. If you're not going to use the panel for a while we definitely recommend the passive standby mode, which only draws a single Watt.

The Panasonic TH-P54Z1A is a very expensive television and you'll need to ask yourself whether the extra outlay is worth it when compared to Panasonic's other panels and other slim TVs on the market. In the end, this plasma panel is a competent package we'd be happy to see mounted in the centre of our home.