It's a hefty investment, but if you work in a field that's tough on regular laptops — and you've already gone through thousands of dollars worth of dead laptops as a result — the Panasonic Toughbook CF-19MK3 might be a worthwhile proposition.

The Panasonic Toughbook CF-19MK3 is a fully ruggedised tablet-convertible laptop with a 10.4in screen. It's aimed at professionals who work in factories, on building sites, outdoors or on the road. This notebook is suitable for law enforcement, emergency services and military operations, too. It’s designed to be used in any environment in which a regular laptop might be too sensitive.

The Panasonic Toughbook CF-19MK3 is water-, drop-, vibration-, dust- and temperature-resistant to military standards. You can easily use the Toughbook CF-19MK3 on a factory floor, where dust and hard floors are the harbingers of death for mortal laptops, and you can also ride with it in a bumpy van or accidentally leave it out in the rain without it giving you any grief. 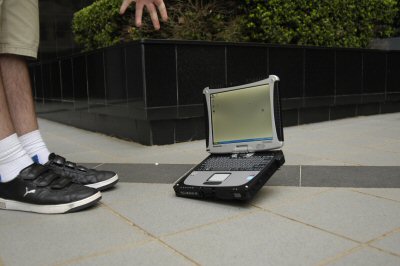 The Toughbook is certified to withstand a drop from a height of 90cm. We dropped it numerous times onto hard surfaces for our enjoyment, without causing any damage to the unit.

The Toughbook's components are capable of supplying good speed for field applications, and they won’t drain the battery too quickly either. We got over four hours of use from the battery in our standard video rundown test, during which we loop a video while the laptop is running at full power with maximum screen brightness and the wireless radio enabled. The CPU is an Intel Core 2 Duo SU9300, which is an ultra-low-voltage CPU that runs at 1.2GHz; the notebook has 2GB of RAM. This configuration performed just as expected in our Blender 3D rendering and iTunes MP3 encoding tests, recording times of 2min 31sec and 2min 37sec, respectively.

These components are housed in a hardened magnesium alloy case and each port and slot has a flip-down cover with a rubber seal, which prevents water from entering the chassis. 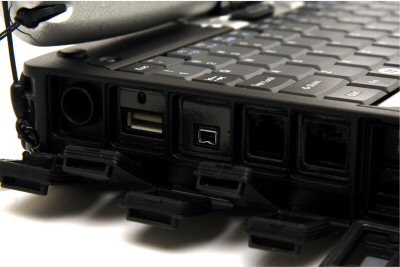 The left side of the notebook has concealed power, USB 2.0 and FireWire ports, as well as 56Kbps modem and Gigabit Ethernet jacks.

Even the docking slot on the base of the laptop has a flexible rubber seal. Although these seals don’t allow the CF-19MK3 to be fully immersed in water, it can withstand spills and sprays. 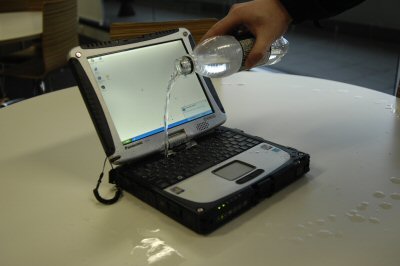 Water that's poured on the Toughbook's keyboard comes out through drainage points at the bottom-rear of the chassis.

These seals also protect against airborne particles down to the size of dust. Similarly, the lack of vents anywhere on the case helps keep particles and moisture at bay, and this design doesn’t make the laptop run hot. In fact, the CF-19MK3 runs very cool, even after it’s been used for a full day’s work. Because it’s not a thin laptop, there is plenty of space for the ultra-low-voltage CPU and the other components to disperse their heat. The case does get slightly warm, but it’s barely noticeable.

The hard case protects the screen and all the electrical and mechanical components from being damaged. Furthermore, one component isn’t directly connected to another component in order to minimise damage from vibration and shock. The hard drive, for example, is isolated from the motherboard and connected via a length of cable. The drive itself is encased in a damper that protects it from shocks when it’s dropped from heights of up to 90cm. 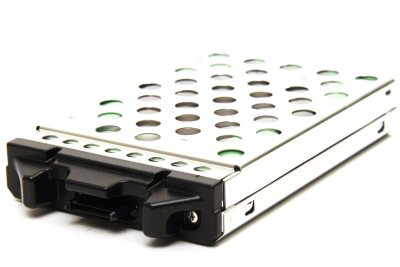 The hard drive can be easily removed from the Toughbook, and it's housed in a damper that protects it from drops and shocks.

Panasonic has chosen a Hitachi Travelstar (HTS543216L9SA00) SATA drive with a 160GB capacity for this particular Toughbook. It’s not a solid-state drive — which would benefit this laptop greatly — but a 5400rpm hard drive. Cost versus capacity is the reason behind the use of the spinning hard drive, and the Touchbook CF-19MK3 is already an expensive beast.

The usability of the Toughbook CF-19MK3 isn't great overall, which is to be expected considering how small it is (if it wasn't ruggedised, it would be as small as a netbook). The keys are 16.5mm wide, which makes it slightly awkward to type on the keyboard for long periods of time, and the touchpad — because it is designed to be tougher than a regular touchpad — feels a little rough on your finger and sometimes isn't very responsive.

The touch screen, however, is very useful. It is very bright and can easily be viewed in sunny conditions. It has a 4:3 aspect ratio and a 1024x768 resolution. Law enforcement users will appreciate the 'covert' mode: the monitor's backlight and the chassis LEDs switch off when the Function-F8 key combination is pressed.

The display can be turned and placed flat on the keyboard. A stylus is supplied and it's very accurate. You can navigate Windows easily with it and also write notes or use the virtual keyboard. There are buttons on the front of the chassis that can be used to change the screen brightness and orientation, invoke the virtual keyboard and bring up the Task Manager. 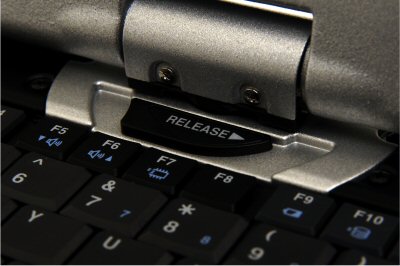 A lock prevents the screen from inadvertently pivoting.

You can get the Toughbook CF-19MK3 with an optional built-in 3G modem, which would make it the ultimate computer for the road; a USB or ExpressCard modem would leave the protective flaps open and exposed to the elements. The SIM card reader is accessible from the back of the unit, near the audio ports. The 3G module will work with any HSDPA network. For security, there is an embedded TPM, and there is an optional fingerprint reader available, too.

Despite the bulky design, and considering all the reinforcement that's been applied to the chassis, the Panasonic Toughbook CF-19MK3 weighs just 2.25kg. It has a carry strap, which makes it easy to handle, and the screen can be locked, even when it's in tablet mode. The price, however, is out there: it costs $7499, and this doesn't even include the 3G module. It's definitely not an investment to be taken lightly, but it will probably pay for itself if you've experienced broken laptops while on the on the job before. It's quite a funny feeling playing with a laptop that's so expensive and yet being able to treat it with disdain. Usually something this expensive is handled like fine china, instead of being thrown around like a basketball.