The 12.1in, semi-rugged Toughbook CF-C1 is designed to withstand vibration, drops (up to 76cm) and accidental spills. It doesn't look pretty, nor does it feel great to use, but it's very useful. Its touchscreen allows you to use the notebook as a tablet PC, and there is even a handy strap on the underside of the notebook so that can carry it easily in one hand like you would a clipboard, for example.

At 1.5kg, the Toughbook CF-C1 is a deceptively light notebook that's not quite as rugged as previous Toughbooks we've seen (such as the CF-19MK3). Instead it's designed to be tough, yet still resemble a normal tablet-convertible PC. It's good for all sorts of business users and field workers who want something sturdy for on-site work as well as old-fashioned office tasks.

It runs a first generation Intel Core i5-520M CPU, which has a frequency of 2.4GHz, two cores and Hyper-Threading. It's joined by 2GB of DDR3 SDRAM, a 250GB, 5400rpm hard drive and integrated Intel HD graphics. It comes pre-installed with the 32-bit version of Windows 7 Professional.

It's not a powerful configuration by any means, but it supplies enough grunt to get through most office and Web applications with ease; you can even use it for tougher tasks such as editing and encoding media files (although you might want to increase the RAM in that case). It recorded 55sec in our Blender test and 1min in our iTunes test, while in 3DMark06 it recorded 1335. These results are standard for a laptop with a 2.4GHz Core i5 and integrated Intel HD graphics.

The hard drive is a 250GB model with a 5400rpm spin speed and it recorded a transfer rate of 22.31 megabytes per second in our tests, which is sluggish. Panasonic has gone for more capacity and a lower price by installing a mechanical drive, but an SSD would make this laptop even more immune to data loss, and would make the system quicker as well. We dropped the Toughbook numerous times from close to its rated 76cm height while it was operating and the system continued to run without any problems. The hard drive is mounted in a cage that has soft pads either side. 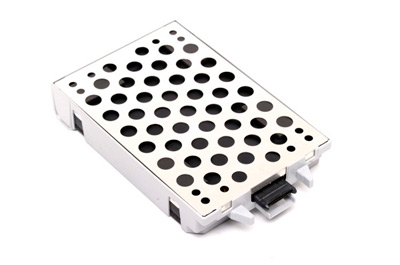 The hard drive cage. There is padding along the sides.

Its 4-cell, 43 Watt-hour battery lasted 2hr 25min in our tests, in which we disable power management, enable Wi-Fi, maximise screen brightness and loop an Xvid-encoded video. You can get more life out of it by enabling one of the many Panasonic profiles that are present, or you could create your own. Either way, only two and half hours isn't a great result and you might want to consider the optional second battery if you'll be using the laptop regularly while in the field. 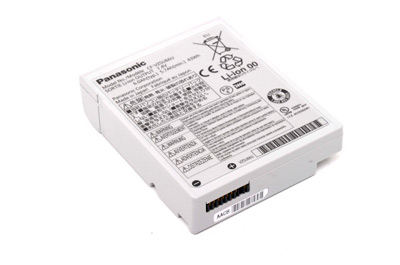 The Toughbook's small and light battery. Up to two batteries can be installed in the chassis.