We're looking forward to the chance to spend some quality time with the Panasonic Viera TH-P50VT20a -- a 3D-capable plasma TV -- when we get it into our Test Centre. For now here are our impressions based on a demonstration staged by Panasonic.

We recently had the opportunity to spend some time with the Panasonic Viera TH-P50VT20a, a 50in 3D plasma TV. We won't be able to render a final verdict until we get some quality time with the TH-P50VT20a in our Test Centre, but here are our initial thoughts.

First things first: the Panasonic Viera TH-P50VT20a requires glasses to watch 3D content. They aren't your standard, paper red-and-blue tinted glasses however; these are battery-operated sports-like glasses that sync with the television via infrared and work with it to create the 3D image. Turn them on, and after a few flickers you'll see a once blurry image become solid and almost tactile. They're quite comfortable, even for those who already wear glasses, though the odd feeling of wearing spectacles just to watch TV won't go away quickly. Panasonic has built the glasses to last 100 hours on a single CR-2032 battery; it's the same kind used in calculators, so it's easy to replace.

During our time with the Viera TH-P50VT20a we watched a range of 3D content from sports to documentaries, simulated games and a 3D trailer for Astroboy, played on a Panasonic 3D-capable Blu-ray player.

The 3D feature added something different to each piece of content; in documentaries it was the stark contrast of the mountains to the sky and the water splashing in front of your eyes. When watching sports we felt like we needed to catch the ball pitched towards us, while we began to notice the creases in uniforms and the tiny beads of sweat dripping off players. Games provided a similar level of immersion: though simulated, a racing demo showed us the ability to view the HUD in a separate layer to the action on screen, while the depth of field was much improved. The Astroboy trailer, like most current attempts at 3D in animated film, was somewhat disappointing, with a simple differentiation between the foreground and background.

Some examples were naturally more convincing than others. While the increased detail and immersion lends a lot to documentaries and sports, the racing simulation left us unconvinced of the technology's real benefits for gamers. Likewise, action and adventure movies are sure to be a hit with early adopters of 3D-capable TVs and Blu-ray players, but we don't see much point in 3D for period dramas. 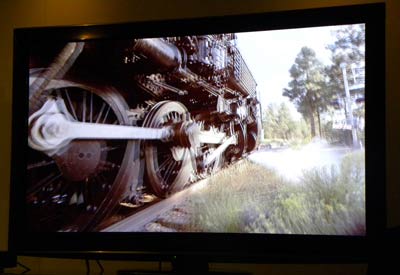 It may not look like much to you, but with glasses the train definitely looks real.

Panasonic's 3D technology works by alternating frames between the left and right eyes. The television displays 100 1080p frames for each eye per second, meaning that both the TV and Blu-ray player or games console must output double the number of frames required for current 1080p content. That's why Panasonic has chosen to introduce the technology with its Neo Plasma sets first: the refresh rate, picture quality and viewing angles are all optimal for displaying 3D images.

The 3D experience was definitely stunning, but we think there are a few things to iron out. The glasses, for instance, may be a burden for some. One company is promising glasses-free 3D TV in the near future, but Panasonic's Consumer Electronic Group Director, Paul Reid, told GoodGearGuide that the technology was still a fair way off. Reid said the loss in picture quality and poor viewing angles when using the technology were too much of a trade-off for test audiences.

Panasonic's glasses aren't perfect either. The infrared technology used to sync the glasses to the TV requires line of sight, so there must be a relatively clear path between you and the TV. There's some leeway in viewing angles but we noticed the range was quite short; when standing five metres away from the set, the glasses suddenly switched off and the picture became blurry. The glasses will automatically turn back on when in range, but standing on the range border will confuse the glasses, causing a headache-inducing flicker.

While movies like Avatar and Pixar's Up give you a taste, the 3D experience is different in a small lounge room. Most would be used to distractions at home, from people walking past to the lights and noises around you. 3D TV doesn't allow for those distractions; it's designed as a completely immersive experience that takes you on its journey, whether you want to go or not. That considered, the 3D experience is best suited to the occasional movie on a Saturday night, rather than a constant experience day in and out.

Thankfully, the 50in Neo Plasma used in our demo was, according to Panasonic, also the company's "best 2D television." Panasonic isn't planning to release 3D-capable televisions smaller than 50in. We see the point; the smaller the screen, the less likely the 3D technology will immerse you as a viewer. 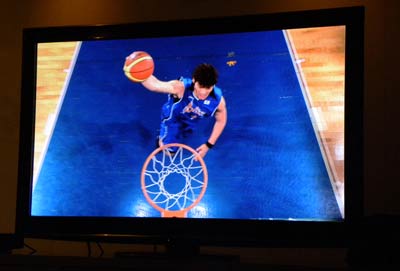 Avid sports fans are likely to get the best experience from 3D-capable televisions.

The first Panasonic 3D-capable televisions should reach Australia by "mid-year", bundled with at least one pair of glasses.