The drive towards virtualisation has meant that there's a been a growing interest in thin clients as the front end. 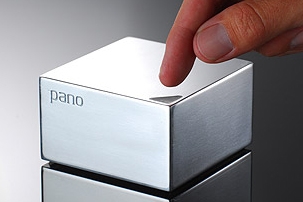 The drive towards virtualisation has meant that there's a been a growing interest in thin clients as the front end. When Paul Maritz, the CEO of Vmware starts talking publicly about the emergence of the 'software mainframe', the realisation is that clients are about to get even thinner.

The Pano terminal takes the concept one stage further, not so much thin as positively anorexic, indeed the company itself talks of a zero client. All the processing is carried out at the back-end, Pano provides the administrator software enabling the creation of individual profiles for users, e.g. an accounts assistant is provided with a view of the accounts package but little more. The whole shebang runs under VMware

The device itself is like nothing no other computer terminal, it looks more like something from Dr Who than the property of the IT department. Resembling a silvered paperweight, it takes up just 295 cubic centimetre, so it's small enough to fit in a pocket. Although that's something for the security conscious to bear in mind, because there's no data held locally, the loss of such a device wouldn't have dire consequences for the enterprise.

One of the key selling points of the device is the small power consumption, just 3W. A back of the fag packet calculation reveals that this would cost about GB£25 a year to run, a considerable saving on the cost of a PC, although, of course, there's also the running cost of a monitor to take into account.

It takes a minimalist approach: just 3 USB slots, one Ethernet and one VGA slot for the monitor (plus sockets for headphones and mike).

The zero client moniker comes from the fact that the device has no moving parts, no data stored in the device itself and no operating system.

One of the most noticeable features is the blue light in the top corner of the device. This represents a sign-off, hitting the blue button disconnects the session and means that a user logging in at another desk will pick up from where he or she left off. Administrators can also set the Pano terminal to disconnect automatically if it has been unused for a certain amount of time.

When we looked at the Pano, there was a long delay before the screen was displayed - no fault of the device itself but a reminder that the thinner the client, the more reliance is placed on the network, so any latency issues within the corporate infrastructure would need to be resolved before the Pano becomes viable, for example by putting in an accelerator such as Riverbed into the network, allied with software such as RTO or Appsense to speed up login times.

Unlike other terminals, the Pano doesn't use RDP but uses a proprietary protocol for delivery of graphics. The handling of high end graphics such as CAD would still not be viable but the protocol does make a decent fist of handling video. We watched iPlayer using Pano and while it wasn't the smoothest experience, there was no massive loss of quality.

One downside of Pano is that it won't work outside the corporate environment so it would not be an effective way to include home or nomadic workers. Users can still get access to a corporate desktop via a web browser and IP address but they don't get the full, seamless experience. However, the Check-In/Check-Out capability promised in Vmware's View 4 software should change that.

The Pano terminal is not the cheapest device on the market: it retails at about £250 (with discounts for bulk sales) and companies still have to buy the monitor on top of that. However, the lower power consumption means considerable saving on the electricity bill but even more persuasive for IT managers is the savings driven by having a single point of control, one master image will serve an entire workforce and handling of patches and service packs becomes a doddle. For example, there's no longer a requirement for IT personnel to visit employees' desks — all fixes could be handled from the desk.

It;s not for the quick fix but for any company taking a long-term view, there could be considerable cost savings; with no moving parts, it's entirely possible that the Pano would meet all current and future needs.