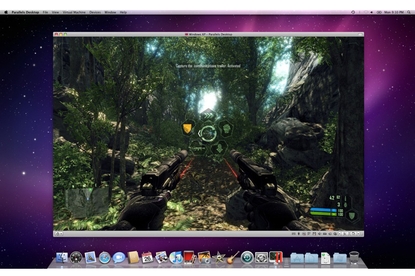 Gamers, web developers and businesses alike will welcome new features in Parallels Desktop for Mac 5.0, whether set to make Windows apps more invisibly blend within OS X, or to run as usual in a separate frame. New performance boosts are always appreciated, and in our tests we found 3D gaming much improved. Virtualalised gameplay may still behind native Windows booting, but it’s now considerably faster, enabling the smooth playing of many games without rebooting through Boot Camp. And for developing or day-to-day use of Linux, OpenGL 2.1 graphics support is invaluable.

[Check out the latest version of Parallels: Review: Parallels Desktop 12 - How to use Windows on a Mac]

And as with Fusion 3, Parallels Desktop for Mac 5.0 can list many new features and interface tweaks, to what was already a well-specified and mature application. In fact, there's so much room for adjustment, you may find yourself searching through pages of settings and preference in order to get the program working just the way you like.

In addition to the existing Coherence mode, which integrates discrete Windows programs within the usual Apple Mac OS X environment, a new Crystal mode hides the gubbins of a Microsoft OS even further. It hides the Parallels top menus and its Dock icon, putting a Start menu in the top toolbar, with installed Windows apps available from a folder shortcut in the righthand side of the Dock.

In either of these mix-up modes, Windows' windows lose their Aero translucency against the Mac desktop, although this can still be seen between overlapping Windows' windows. And like Fusion, there can be a loss of smooth fluidity when moving windows around.

Modality, meanwhile, puts a complete Windows desktop frame into a miniature and semi-transparent floating window, good for keeping an eye on several running VMs at the same time.

MacLook tries to further the Mac-Windows integration by giving Windows apps the appearance of Mac OS X, using Stardock MyColours to skin Windows. If you really can't stand to see Redmond's GUI elements, this is for you.

Changing to Coherence or Crystal can take several seconds, leaving the Mac somewht unresponsive. We found changing to MacLook even more enervating, with some messy looking interface elements from Windows apps that were open before the changeover. If you're going to use this interface, we'd suggest doing so before opening any Windows programs.

In general, these integration choices will suit anyone who has occasional Windows apps to run but don't need the full Windows operating system experience. But be aware that taking away the regular Windows desktop leaves those programs' windows without quite the same quality of on-screen rendering.

Another practical feature is full support of the Mac portable trackpad, and Apple mouse control. On a MacBook, for example, you can take advantage of the multi-touch pad for pinch-to-zoom and two- and three-finger scrolling and swiping. And if you have a new Magic Mouse, you'll find all its scrolling and swiping gestures supported too, ironically giving Parallels better control of a virtualised Window OS than you'll find on a physical Windows PC itself.

Of other numerous changes, the ability to lock down settings may be welcomed by IT managers looking to roll out the program in business or computer lab environments. An express Windows installation option uncovered a useful trick - choosing which version of Windows 7 to install from a single-version Ultimate disc. By ignoring the serial code screen while installing, you can choose which of several versions of Windows 7 to install, just as you could with Windows Vista before.

A Virtual Machine List shows all available VMs, which can be individually coloured for ease of browsing. Unlike VMware Fusion, we couldn't find an easy way to call up this list through a keyboard shortcut, with Parallels Desktop for Mac 5.0 generally a little behind in its key shortcut options. Nor will the list show a thumbnail of a suspended VM.

Besides the revised graphics driver for Windows, now up to DirectX 9.0c with Shader Model 3, and the same as Fusion, Parallels Desktop for Mac 5.0 also offers OpenGL 2.1, enabling a much better interface for Linux OS guests - for example, allowing for startling Compiz eye candy effects. We found these interface effects worked even more liquid than on physical installations of Linux we've tried recently.

In the case of VMware Fusion, we had seen a small but measurable increase in speed when moving from v2 to v3 - from 71 to 73 points - and Parallels Desktop for Mac 5.0 showed a similar benefit. It was only a one point net increase, but this time Parallels 5 finished with a score of 75 points, highlighting it as the fastest virtualisation solution we've ever recorded.

Graphics tests were even more emphatic in showing increased performance. Playing FEAR at Maximum quality settings, 1024x768, the latest version of VMware Fusion reached 16 frames per second (fps), still four points behind the average framerate of the last version of Parallels 4. And with Parallels Desktop for Mac 5.0, we saw the results in this test hit a very impressive 31fps.