Parrot's wacky AR.Drone 2.0 quadricopter is back for round two Parrot's wacky AR.Drone 2.0 flying quadricopter provides a far better control system than the original model, making it much easier to fly. However, its build quality remains questionable, battery life is poor and it is pretty expensive for what is essentially a toy, albeit an impressive one.

Parrot's original AR.Drone, a flying "quadricopter" controlled via an iOS device, was an impressive piece of technology but it was overpriced, difficult to accurately control and had questionable build quality. Parrot claims the new AR.Drone 2.0 addresses some of these issues but is it a big enough improvement over the original?

Like its predecessor, the Parrot AR.Drone 2.0 is an unmanned aerial vehicle (UAV) that uses Wi-Fi technology to connect to an iPad, iPhone or iPod Touch (and now an Android device) where it can be piloted using augmented reality. In layman's terms, this is a helicopter with four blades that's controlled via a specially designed app for iOS and Android devices. The Parrot AR.Drone 2.0 generates its own Wi-Fi network on-board, without the need of an Internet connection or wireless router to get started.

Getting it started is perhaps the best thing about the Parrot AR.Drone 2.0. Charge the included battery, download the AR.Freeflight app (a free download for iOS and Android devices) and connect to the AR.Drone 2.0's own Wi-Fi network in a few simple steps and you're immediately ready to fly. It's that kind of effortless user experience that makes the AR.Drone what it intended to be: a whole lot of fun. 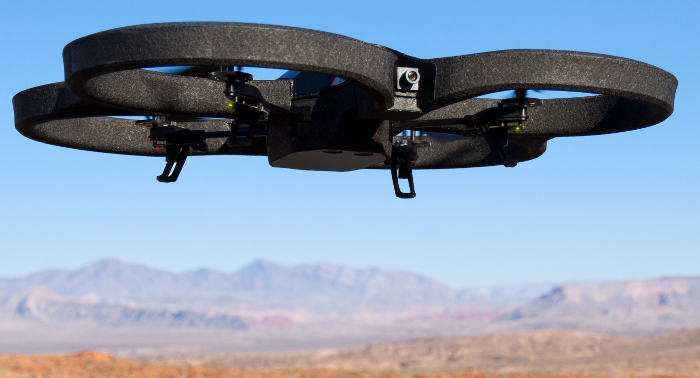 The biggest improvement the AR.Drone 2.0 offers over its predecessor is just how easy it is to fly. In an attempt to appeal to casual users, Parrot's "absolute control" mode ignores the orientation of the quadricopter and uses the person controlling the chopper as the reference point. Tilt your iPhone towards you and the AR.Drone 2.0 flies towards you, regardless what way the chopper is facing. Tilt it away from you and the Drone 2.0 flies away from you. It's really that simple and makes for a much better overall user experience than its predecessor. For more advanced users, Parrot allows you to switch to the more difficult flying mode (which uses the AR.Drone 2.0 itself as the reference point) if you wish.

Another big improvement is the AR.Drone 2.0's ability to record 720p HD video and snap photos as you are flying, neither which were possible on the original AR.Drone. The quality of images and video recorded aren't going to win any awards, but the idea of recording your flight videos quickly becomes addictive. The AR.Drone 2.0 allows users to save images or videos on a USB key through a USB port hidden next to the battery, while you can also upload any captured videos directly to YouTube, or still photos to Google's Picasa service through the AR.Freeflight app. Both of these features worked without issues during our testing.

A video of the AR.Drone 2.0 recording during testing. Yes, it crashed.

Parrot claims that the AR.Drone 2.0 is usable outdoors with winds up to 16kmph but we found it performed fairly poorly in the elements. In a park where our flight was protected by the surrounding trees and bushes, wind did hinder our experience. For the most part, flying up to three metres above ground level doesn't pose too many issues with slight wind. However, attempting to fly the AR.Drone 2.0 any higher than that is asking for trouble. Officially, Parrot says a new pressure sensor allows the AR.Drone 2.0 to fly up to six metres.

The AR.Drone 2.0 offers impressive stability during indoor flying thanks to an ultrasound sensor. Once it has taken off the quadricopter simply hovers in mid-air, awaiting a command. Keep in mind that you'll need a rather large indoor area to fly the AR.Drone 2.0 properly. It is capable of manoeuvring down a narrow hallway, but the air the blades generate when flying makes it difficult to remain stable in confined spaces. 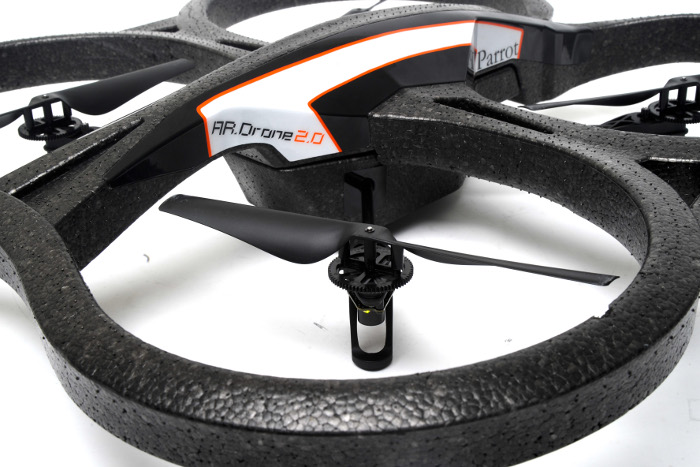 Damage on the indoor hull of our review unit was noticeable after just a few flights.

Physically, the AR.Drone 2.0 looks nearly identical to its predecessor but Parrot claims it has an improved design aimed to combat the rigours of flying (read: crashing). The new model weighs the same as the original (420g with indoor hull, 380g with outdoor hull) but Parrot says it identified the weakest points on the foam hull and reinforced them to make the product stronger.

Despite Parrot's claims, however, damage on the indoor hull of our review unit was still noticeable after just a few flights. Like we experienced on the original model, the foam on our AR.Drone 2.0 review unit chipped and cracked in various places after just a few flights. The visible damage did not appear to affect flying performance but on a unit commanding $300, we would have appreciated a design that didn't highlight so much wear and tear.

Thankfully, almost all of the parts can be purchased separately and replaced if need be. We think you'll certainly need this extra insurance: after just a few flights we managed to break the arm of one of the chopper blades, as our AR.Drone 2.0 went crashing helplessly into the grass during a routine test flight. 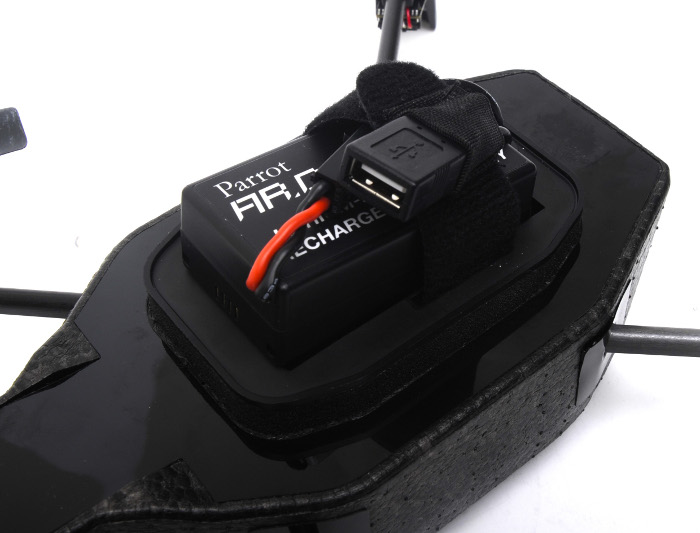 Images or videos can be saved on a USB key thanks to a USB port hidden next to the battery.

Parrot includes two interchangeable hulls in the AR.Drone 2.0 sales package. The first is for indoors and protects the blades from crashes thanks to large, circular rings, while the second is for outdoor flying and leaves the blades exposed.

The Parrot AR.Drone 2.0 is available through "leading retailers" in Australia including Dick Smith Electronics (DSE) and EB Games for $349.

A demonstration of the Parrot AR.Drone 2.0 at the Australian media launch and Parrot's promotional video for the device can be viewed below.