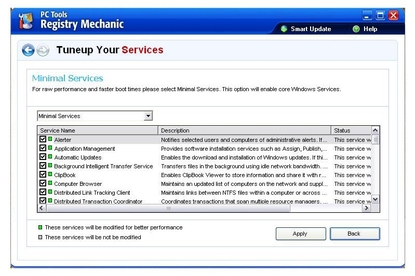 Registry Mechanic does what it claims to do — clean up your registry — but don't expect your PC to go faster because of it.

The Windows registry: no-one knows what it does, how it does it and why it can sometimes cause so many problems. Except for PC Tools; okay, and probably most of you, our loyal readers! PC Tools' Registry Mechanic software purports to solve all registry-related problems in your Windows installation, which is said to make your system run a little faster and eradicate any error dialogues that you receive due to improper registry settings.

Because the registry is often cluttered with entries from long-gone applications, due to improper installations or other reasons, it's suggested that using a registry cleaner to sift through the registry, find them and destroy them will make your PC run faster. This is a claim that we found hard to substantiate while using a six-year-old PC with more than 30 programs currently installed (and which probably had more than a hundred others installed at various stages of its life).

When we fired up Registry Mechanic, we clicked on the 'Scan your registry' link in its main interface and it proceeded to find over 170 problems with our PC's registry. Most errors were from uninstalled applications that had left remnants in the registry; errors were also found that related to shortcuts and file extensions. This wasn't wholly unexpected due to the age of the PC — as well as the fact it has never been reformatted and Windows reinstalled — but the PC also didn't suffer any problems while these errors were present.

Nevertheless, Registry Mechanic cleaned up the mess that years of installing and uninstalling had left in the registry, and afterwards it asked us if we would like to compact the registry. PC Tools claims that a performance boost might be noticeable if compacting reduces the size of the registry by five per cent or more. As luck would have it, our registry was reported to have a bang-on five per cent reduction in size after compacting.

Upon restarting the PC and using it as we normally would, applications seemed to launch faster, and windows were more responsive, but this was all a placebo effect. The PC really wasn't any faster.

Herein lies the conundrum of the registry cleaner: Registry Mechanic picked up a whole bunch of registry errors on our PC, but the ensuing clean-up didn't boost the PC's performance in a way that was noticeable during our normal usage patterns. Nor did these problems make our PC difficult to use during all the years they were present.

We did save a little space by using Registry Mechanic to compact the registry, but that's about it. We can confirm that Registry Mechanic will find and destroy any registry keys from applications that have been incorrectly uninstalled, and if your system currently has annoying pop-ups that complain about missing shortcuts or other such problems, it will fix those, too. But it won't make your PC go faster.

One thing's clear though: we did feel better knowing that Registry Mechanic cleaned up more than 170 registry errors, and that subsequent scans gave our system a clean bill of health.