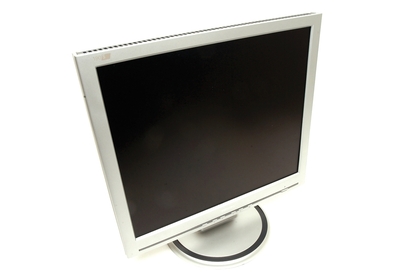 This monitor produced the clearest picture in our motion blur tests and should definitely be considered if you want a large screen for games. Its colour capabilities, despite being a 6-bit panel, were also comparatively good, as was its brightness level, despite the 250cd/m² rating. We didn't like this monitor's base, but we feel it's a great unit for everyday use and for games.

Unlike most of the other monitors in this round-up, we had to increase the refresh rate of our graphics card in order to eliminate some slight ghosting and blurry text that was evident during our tests. We ran the screen at 75Hz rather than 60Hz, which produced a perfectly clear picture.

The 190S6FS/75 is another one of the panels in this round-up that can only display 16.2 million colours (dithered), not 16.7 million colours. The sacrifice in colour comes with the increase in response time, and this panel has the fastest pixel response time of all the monitors that we looked at (8ms).

In our motion blur tests we did pick up slight trailing as the text moved from right to left, but text colouring did remain solid and it did not induce dizziness as it scrolled past. As such, this monitor is well recommended for games. It does have a low brightness rating of 250cd/m², but was still capable of producing a vibrant and uniform display and its viewing angles were very good from all sides.

Physically, the 190S6 has a stiff stand that only tilts backwards and which feels awkward while being tilted. It has a 2cm thick bezel across the top and along the sides.

This model carries a relatively high retail price but at the time of writing, we could buy it online for significantly less.