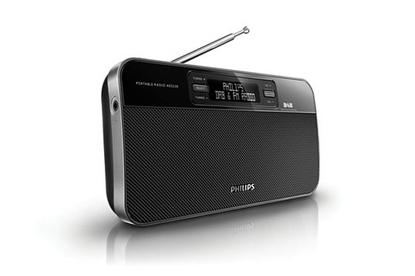 We aren’t going to tell you to rush out and buy this digital radio. It lacks many features, feels flimsy and it's expensive. That said, it is light and you can switch between FM and DAB+ stations.

Philips' AE5230 is a portable DAB+ digital radio. Lightweight (650g) and easy on the eye, this DAB+ radio can also tune in to regular FM stations; it makes for a nice addition to any kitchen bench or bedside table. It can be powered by six AA batteries or plugged into a power point.

The Philips AE5230 has a very basic design, with six control buttons on the front of the radio along with a single 2.5in speaker. The top of the radio has buttons for power, five station presets and switching from digital radio to FM and vice versa.

The backlit LCD is clear and easy to read. Text moves quickly across the display, but not so quickly that you can’t read it and not so slowly that it frustrates you.

There is no recording function and the radio only has one speaker. There is also no audio input, so you can’t even plug your MP3 player in; there is a headphone jack, however.

Given the price ($179.95), you’d expect a lot more bang for your buck. We recently reviewed the OXX Digital Vantage, a radio with more features, better sound quality and a lower price ($149.95). The lack of an alarm clock on the AE5230 also left a bad taste in our mouth.

Sound quality is relatively good — until you want to turn the volume up. At high volumes there was noticeable distortion and the sound became quite harsh and tinny.

In the AE5230’s defence, it has some redeeming features. It scans quickly between stations, and it's fairly easy to navigate through the menu. Its weight makes it easy to carry around. This said, it's probably best you leave it sitting in one spot because it feels flimsy.

There are better DAB+ radios on the market at the moment at a similar price point to the AE5230. This radio had the potential to be a great buy, had it not been for the flimsy feeling design and lack of features like an alarm clock and an audio input port.