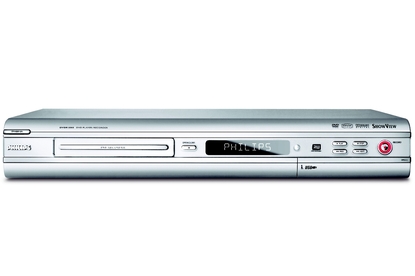 The Philips DVD-R3365 image quality is average, but this recorder is attractively priced and easy to use, with support for G-codes.

Even though Philips is one of the companies behind the DVD+R format, the DVDR3365 can record to DVD-R/RW discs as well as to DVD+R/RW. This gesture toward detente in the DVD wars doesn't seem to have extended to the manual, however: While DVD+R receives extensive coverage, DVD-R is mentioned only in the specifications section.

The DVDR3365 can also play both DivX and other types of MPEG-4 files, a huge plus if you want to play videos that you downloaded from the Internet or encoded yourself using those formats. On the other hand, it doesn't support the recently released Divx 6.0 format or Divx HD.

We found the image quality of recorded video adequate but not impressive. Colours looked rather dull, and the lack of shadow detail made the video seem somewhat gloomy and flat. However, details were well reproduced. We saw few compression artifacts and little dithering. Recorded video was a pleasure to watch, though not as good as the video recorded by other leading player/recorders.

One big omission: There's no easy way to edit video. The unit cannot remove a section of video (such as a commercial break) without defining chapter points at the beginning and end and then deleting the chapter. This process is significantly more labor-intensive than the A-B editing that many other players offer.

The Philips also supports G-codes. Naturally, that feature makes scheduling recordings much easier: Instead of entering the time and date of a program, you just enter the broadcast's three- to six-digit G-code (you can find these in the newspaper or TV Guide). The recorder works out the time, date, and channel from the code.

We found the DVDR3365 easy to control, with a small but well-designed remote. Although most of the keys are the same size, the most commonly used ones (such as play, record and the directional keys of the on-screen menu) fall naturally under the thumb and are relatively easy to find by touch.

At this price, the DVDR3365 costs significantly less expensive than most of the recorders we have tested and the vendor's inclusion of VCR Plus+ codes makes this model a good replacement for an aging VHS deck.