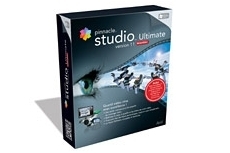 Pinnacle Studio Ultimate 11.0 offers enhanced HD support and easier methods for transferring footage to both portable devices and the Internet. For an enthusiast, this product offers a good bundle of features and extras for the price.

There are now three main players on the home video-editing stage -- Ulead Videostudio, Adobe Premiere Elements and Pinnacle Studio. Pinnacle Studio Ultimate 11.0 is owned by Avid, a leader in professional video editing, and this version sees some high-end additions borrowed from its experience in the industry.

The main area that all home video-editing software is concentrating on is high definition, which is the road most camcorder manufactures are currently taking. For most users, there's probably no need to update existing software until HD becomes more prevalent. But should you be one of the rare breed of video editor who's already becoming immersed in HD, Pinnacle Studio Ultimate 11.0 is a top-of-the-range package aimed directly at you.

HD input and output is now fully supported. As does Ulead Videostudio, Pinnacle Studio Ultimate 11.0 offers support for AVCHD (Advanced Video Codec High Definition) format files, which were introduced by Sony and Panasonic. This means that your HD files will take up less storage space on disc.

It's worth noting that, while you may be editing HD files, you may not have an HD recorder to allow you to write your finished movies to disc. Pinnacle has thought of this and Pinnacle Studio Ultimate 11.0 allows you to store around 30 minutes worth of HD footage on an ordinary DVD, which can then be played back with an HD-DVD player.

If your interests lie more in putting video clips and movies online or on to a portable device, then your needs are catered for equally well by Pinnacle Studio Ultimate 11.0. It now supports output to an iPod or PSP (PlayStation Portable), and the Web interface has been improved so you can export your films directly using the Yahoo Videos service. Choosing how your video will be output is simply a matter of selecting the type of format you want to record your video to, choosing the quality setting and then selecting the file type.

Pinnacle Studio Ultimate 11.0's main interface includes three tabs, each of which controls the key parts of the software -- Capture, Edit and Make Movie. This has been tidied up and it's a lot easier to work with than Adobe's Premiere Elements. Most tweaks are minor, however.

One area that is a real bonus, and one we're surprised we haven't seen in other software of this type, is the ability to capitalise on the extra space provided by widescreen displays. As most modern PCs come with these, it makes sense that such software should use every last inch to display the many windows involved in such a complicated process as editing home video. All you need to do to use your widescreen display to the full is to slide the appropriate control bar. All the windows and toolbars will automatically resize.

Another nice touch in Pinnacle Studio Ultimate 11.0 is the enhanced SmartSound feature that allows you to add a soundtrack to your film. You could easily find these a little tacky, but the software does make them easier to add. If you want sound with your pictures then Studio is good choice.