Whether you're an enthusiast DJ or a professional, you'll love the Pioneer CDJ-900 for its great features and ease of use. It doesn't feel as sturdy as some of the premium players in Pioneer's line-up, and its wheel is a little too sensitive, but the more you use it, the more you get the hang of it. Its sound quality is great, scratching sounds authentic for the most part and we love its bright and detailed LCD screen.

The Pioneer CDJ-900 is not the kind of CD player you would use in a home theatre setup: it's a multiformat CD player designed for DJs. It has an 8in jog-wheel that can be used for scratching and cueing, and it has a sloped LCD screen that is bright enough for use in dark clubs.

The CDJ-900 isn't the premium model in Pioneer's CDJ line-up, which consists of 'big brother' and 'little sister' models. The CDJ-900 is actually the 'little sister' to the CDJ-2000, which is the 'big brother'. Nevertheless, it is one of the higher-end DJ players on the market and it's designed to appeal to professionals. As such, it comes with a high retail price of $1999. For this price you get plenty of features, including Pioneer's RekordBox tagging software and multiformat support.

In addition to playing CDs, the CDJ-900 can also play MP3, AAC, WAV and AIFF files either off a CD or a USB drive. It even has an RJ45 (Ethernet) port on the rear, which, when coupled with Pioneer's ProDJ Link feature, works wonders for anyone with mass storage devices. It basically allows users to play music from one CDJ-900 on another via a LAN cable, eradicating the need to have two USB devices.

The rear of the CDJ-900 has stereo RCA ports, as well as a digital coaxial output. A 3.5mm terminal is present, too, and it can be used in conjunction with Pioneer mixers to automatically control the CDJ when the fader is crossed. A USB host port on the rear of the unit also allows you to plug the CDJ-900 in to a laptop so that you can use it as a MIDI controller, for example.

At 3.9kg, the CDJ-900 weighs the same as its predecessor, the CDJ-800, but it is a slightly taller unit. The CDJ-900 has a matte black faceplate as opposed to the glossy finish that can be found on other professional players such as the CDJ-1000MK3; one benefit of this is that it won't collect fingerprints. 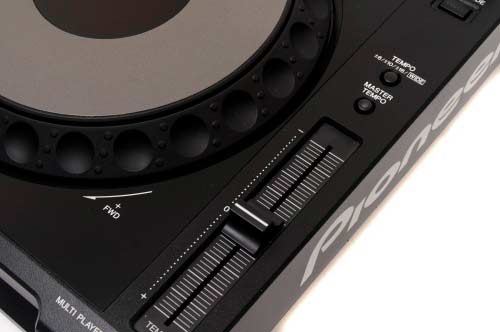 The CDJ-900 bears a striking resemblance to other models in the 12in CDJ family. Similarities include an 8in touch-sensitive jog-wheel with animated CD display, a pitch control arm on the right side, and backlit Cue and Play buttons. On the top left of the player is an auto beat-loop bank. One thing we really like about this unit is its angled LCD screen, which faces the user rather than sitting flat. This eliminates the need to rest the player on a slope. The screen itself is much brighter than on previous models, which is handy considering the player will generally be operated in the dark. 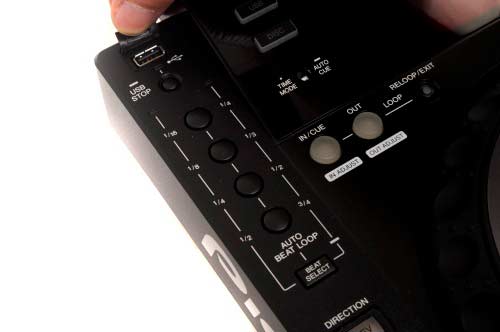 The beat-loop bank and the USB port.

Additional buttons have been added to the CDJ-900, primarily for navigating MP3 folders and menus. While the unit also has traditional forward and backward search buttons, we found it was easier to plough through our music library with the mini jog-dial, which is located just to the right of the LCD. 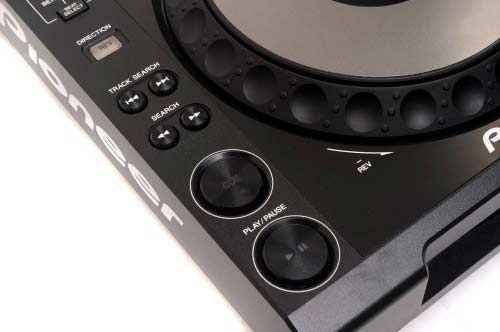 We weren't entirely satisfied with the jog-wheel's feel however, especially after having used the CDJ-1000MK3. The wheel feels a little cheap and a little too flimsy. Its lack of a knob for adjustment (the CDJ-1000MK3 has one) means that you're stuck with an ultra-sensitive wheel.