It's the best plasma television we have seen, but the Kuro PDP-LX609A is Pioneer's last. 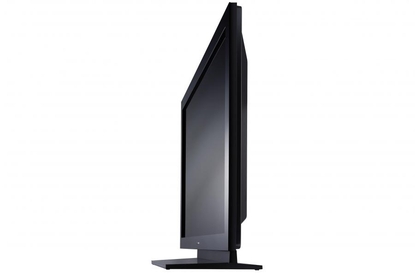 We’re sad to say that this is the last Pioneer plasma television for the foreseeable future — and likely the last ever. Pioneer leaves the market on a high note though: the Kuro PDP-LX609A is the best plasma television screen we’ve seen.

Pioneer has suffered some difficulties recently, with the company announcing it intends to stop plasma television production. It is also undergoing massive corporate restructuring. This means that the venerable Kuro line comes to an end with the ninth generation — and the Kuro PDP-LX609A is the flagship television in this series.

The Pioneer Kuro PDP-LX609A does not stray very far from the tried-and-tested Kuro design scheme, with a glossy, thick piano-black bezel and a very wide stand. Shipping in a separate box is a set of stereo speakers that attach to the Kuro PDP-LX609A with brackets. This plasma television has a very involved set-up process — you’ll need an assistant and a spare half hour to get everything connected. After that, you will need to learn the ins and outs of the remote, which is chock-full of buttons for every conceivable function; we would have preferred a more comprehensive on-screen menu to keep the remote clutter to a minimum.

We think that the Pioneer Kuro PDP-LX609A has the best contrast we have seen from a plasma television. While the blacks are incredibly dark, detailed and inky, whites are bright and vivid. This great contrast extends to its ability to reproduce subtle gradations of colour — this plasma television is better than any other we have seen. Pictures generally have a film-like quality; the Pioneer Kuro PDP-LX609A has a smoother picture than the pin-sharp panels of recent LCD televisions like the Samsung Series 9 and the Sony Bravia KDL-55XBR45.

Plenty of fine image detail is still on offer when watching 1080p Blu-ray discs and high-definition gaming content, and lower resolution digital television and even Web videos are displayed well. With a 60in panel to fill, we weren’t expecting YouTube videos to be anything more than a blurry, artefact-filled mess but we were pleasantly surprised by their detail. Image noise is kept to a minimum, with high-definition content free of any distortion, jitter or image irregularities The Pioneer Kuro PDP-LX609A includes Pioneer’s well-implemented Optimum picture mode, which balances all the contrast, sharpness, brightness and upscaling settings depending on the content being displayed. We found this to work well — switching the lights off caused the television’s ambient light sensor to boost contrast and adjust the image to suit the room.

This plasma TV boasts more than just exceptional image quality, with the Pioneer Kuro PDP-LX609A packing in a range of useful features. Media can be streamed though its Ethernet port by using Pioneer’s Home Media Gallery — photo, music and video files can be accessed. Only MPEG 1, 2 and 4 video formats are supported, though, so compressed DivX files can't be played. There are no widgets or RSS feeds available, however.

Navigating through the on-screen menu — which has all necessary categories for video and audio tweaking as well as set up and power-saving features — is a pleasant experience thanks to the slick, brushed-metal interface. Menus are well labelled, so there is no opportunity to get lost.

All in all, we can wholeheartedly recommend the Pioneer PDP-LX609A for its brilliant picture, good interface and useful secondary features. If you can afford the exorbitant price, you won’t be disappointed by Pioneer’s last plasma television.