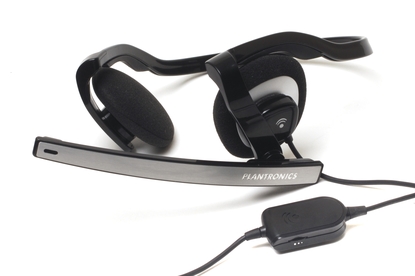 The Audio 500 is a decent, reasonably-priced headset that is simple to install and operate.

The Audio 500 has a headband style design. Audio is delivered through two adjustable swivel-mounted ear cushions and a boom-mounted microphone that tucks neatly up and away when not in use. Less neat is the 3 metre long headphone USB cable, which features a remote that houses volume control and mute buttons, but there's really not much to do about cabling unless you're willing to spend more money on a wireless headset.

The headset is lightweight and comfortable, and despite its flimsy appearance, sound quality is impressive. Voice, music and sound effects are delivered in clear stereo, and the microphone is well positioned to pick up the user's voice without any popping and only minimal background noise. The volume control works well, and the microphone mutes cleanly.

Setting up the Audio 500 is a simple plug-and-play process. The headset connects via USB, and Windows XP automatically recognised the hardware and installed all its necessary drivers in seconds.

In subsequent trials, however, the device still took a few seconds to initiate each time - even though the drivers were already installed. Swapping audio outputs from the sound card to the headset and vice versa while running a program sometimes required Windows to be manually prompted via the Sounds and Audio Devices dialogue box ini the Control Panel. Even so, the drivers didn't seem to allow output devices to be swapped while sounds were still being played.

All in all, the Audio 500 is a decent, sturdy headset that is simple enough to install and operate, and its retail price of $79 is reasonable. The device is especially well suited to VOIP calls due to the inline mute button, and is also a comfortable, inexpensive solution for gaming, and other multimedia applications.