They aren't called Sense for nothing, you know 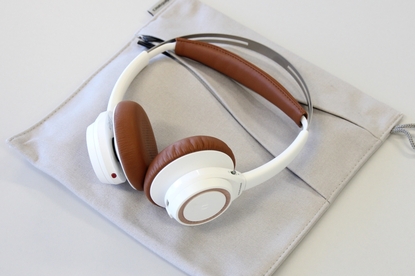 Plantronics' BackBeat Sense headphones have a lightweight over-the-head design with soft cushions that can sit on your ears without crushing them. They are Bluetooth headphones that are simple to operate, they sound good, and you can use them with a cord if you find yourself running low on battery.

One of the key features of the BackBeat Sense is the ability of the headphones to detect when you are wearing them, and when they are idle. Sensors that are built in to the headphone cups will determine whether or not they are sitting on your head and you are actively using them. The moment you take them off your head and rest them around your neck or put them down on the table, the music will stop. After a period of idle time, they will go into deep sleep, and they can stay asleep for six months without losing their current level of charge, according to Plantronics.

This feature should make the BackBeat Sense a pair of no-fuss headphones that you barely have to worry about as far as making sure they are on or off. They are meant to be automatic in that sense. However, we noticed on a few occasions that the headphones kept playing after they were taken off the head. Other times, they took a few long seconds to start playing again when put back on the head. If they don't immediately detect that they are sitting on your ears, then you can put a little pressure on the cups to start the music again.

For tactile control, there is one sliding switch on the right side for power and pairing. You can pair up to two devices and have them connected simultaneously, switching between them seamlessly at any time. Simply pause the music on one device, start it on the other, and the headphones will oblige. On the left cup, you can press the middle button to pause and play a track, and press left or right of the middle to skip tracks. You can rotate the cup forwards and backwards to change the volume.

The right side has a call button that can be used in conjunction with the built-in microphones. Furthermore, there is a microphone/mute button located on the bottom of the left cup that can be used to stop the music you are listening to and amplify the sounds around you -- presumably for times when you don't want to take the headphones off your head, yet want to hear your surroundings. You can press both the microphone and call buttons simultaneously for six seconds to disable (and re-enable) the sensors.

Charging is by way of a micro-USB cable, and can take about two and a half hours. A series of lights illuminates on the earcup to let you know at a glance how much power the headphones are packing. Playback is stated as being up to 18 hours by Plantronics, a figure it came up with while playing music from a mobile device at full volume. A voice informs you of the battery level when you switch them on, using generalities such as 'battery high' and 'battery medium'.

An exposed metal band holds the earcups in a traditional form, and there are ten steps of adjustment that can be made to the plastic sliders so that you can achieve the best fit for your noggin. There is padded 'suspension' that adds to the comfort of the headphones, and this sits just below the metal bar, meaning, in most cases, the metal won't rest directly on your head, but will sit slightly above it.

Flat cushions on the earcups do a good job of sitting on your ears without adding too much pressure, and we found them to be comfortable overall (they tipped our digital scales at 144g). However, those of you not used to on-ear headphones might need some time to adjust, especially over longer listening sessions. They are suitable for the home, as well as outdoors, but there is sound leakage, which may not make them ideal for an office environment when the volume is turned up. They don't have active noise cancelling.

Plantronics makes use of the aptX codec over the Bluetooth connection, and the sounds are produced by lightweight neodynium magnet-based drivers. They pumped out plenty of volume, and we found the sound quality to be favourable for all types of genres. We mainly listened to 320Kbps MP3s ripped from CDs, stored on a microSD card on a Samsung Galaxy S5, and played through Rocket Player.

A healthy dose of bass was present in the hip-hop and R&B tracks we played, with songs such as The Roots' You Got Me, and LL Cool J's Rock The Bells, for example, being served with a deep thump that was appreciated. For this style of music, the BackBeat Sense offered satisfaction mainly because of that bass response.

At the same time, vocals weren't hidden, with rapping and singing blending rather well with the prominent bass. Hi-hats and ticky-tacks sounded bright and tight. These same traits made rock music sound engaging and full to our ears, with songs such as Pearl Jam's Black exhibiting plenty of depth and fullness. In short, if you want your music to be presented with a nice kick and crispness, the BackBeat Sense won't disappoint. You could always play with your favourite EQ app if you want to tailor the sound.

For $249, you'd expect them to sound good, though, and the good part is that they also offer enough comfort so that they can be enjoyed for long periods of time. Bluetooth and corded operation add versatility (furthermore, they support Class 1 Bluetooth, which can give them a 100m range when paired to a Class 1 music source), and the sensors in the cups provide automation so that you don't really have to worry about switching them on and off (most off the time, anyway). Pick these up if you are predominantly after a set of good sounding, and comfortable Bluetooth headphones.