This Bluetooth mobile headset has some useful features built in 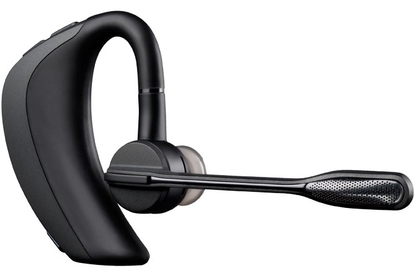 Plantronics’ Voyager Pro HD headset has a good range of useful features built in, like an intelligent sensor that switches between headset and phone speaker when the headset is removed. It wasn’t always comfortable in our testing and it’s slightly larger than other headsets, but it has excellent sound quality and excellent battery life thanks to smart internal circuitry.

Plantronics makes a couple of dozen Bluetooth headsets for mobile phones, and the Voyager Pro HD is both the most recent and the most feature-packed of the company’s consumer models. It’s a large over-the-ear model with a swivelling, noise-cancelling boom microphone.

The Plantronics Voyager Pro HD is made up of a single silicon-eartipped earphone, which swivels horizontally to allow the headset to be worn on either ear. The microphone also swivels vertically, so it can be swung up out of the way when not in use.

Attached to the earphone with a flexible piece of rubber is the rear of the headset, which sits behind the wearer’s ear — as well as holding the headset’s circuitry and battery, it has the Voyager Pro HD’s three buttons for volume control and power. The only other button is a multi-purpose one on the base of the microphone arm, which answers calls and handles other basic functions like dialling or switching audio between headset and mobile phone speaker. A micro-USB port on the bottom of the rear portion of the Plantronics Voyager HD handles charging and any software updates via PC.

We think the Voyager Pro HD is a little big — if the battery was smaller and the boom microphone was a little shorter, it would be more compact and easier to keep in a pocket when not in use. The headset’s earpiece can also be uncomfortable at times, since it’s quite large.

When paired with a smartphone — we used a iPhone 4 to test, but the Voyager Pro HD should work with any phone capable of A2DP audio streaming — the Voyager Pro HD can handle both calls and other audio like music or in-app sounds. The best feature of this headset is definitely its ability to sense when it’s being worn, automatically routing audio from your phone: you can pick up the Voyager Pro HD and put it on to answer a call, and taking it off transfers the call’s audio to your phone’s loudspeaker. Similarly, if you’re listening to a music track on your phone and you take the Plantronics Voyager Pro HD off, the track is paused, and you can start it back up by replacing the headset. If you’re not wearing the headset the call button is locked to prevent accidental dialling.

The Voyager Pro HD worked well with the voice-control features of our Apple iPhone, and we expect the same of an Android smartphone. All we had to do was hold down the headset’s multipurpose button and state the intended recipient. Another useful feature is the headset’s reporting of its battery life over Bluetooth — if you’re worried whether the Voyager Pro HD has enough battery to last your car trip or your conference call, you can glance at your phone’s status display to find out easily.

The sound quality of the Plantronics Voyager Pro HD is, for a headset, very good — our call quality was generally perfectly clear and did not suffer from any audio clipping. We also tested it with a range of podcasts and audio tracks and while it’s not as good as a dedicated pair of quality wired headphones, it’s got slightly better audio quality than our iPhone’s bundled Apple earphones (albeit only in one ear).

The headset has an acceptably high maximum volume level, so it should be able to be used in a busy work or travel environment. Helping this is some basic active noise cancellation, with the external microphone cutting out wind and ambient noise to assist voice call quality.

Bluetooth mobile phone headsets have always been a slightly uncool solution to handsfree voice calling, but the Plantronics Voyager Pro HD introduces a few nifty features, especially the sensor that activates and deactivates the headset whether it’s being worn or not. It still doesn’t look incredibly stylish and it’s a little big and bulky, but the good audio quality and features make it a worthwhile purchase if you intend to use it regularly.