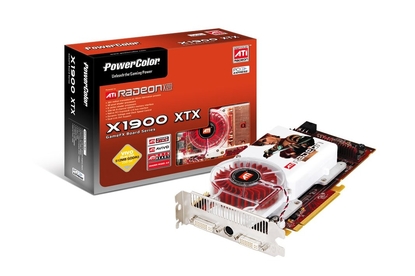 If you don't play high end games, then the PowerColor X1900XTX isn't for you. For serious gamers it could be a worthwhile purchase, though an expensive one.

The sceptical customer might expect the X1900 XTX, which follows closely on the heels of the X1800 series, to be little more than a more refined retread of a familiar path. This would be the wrong impression.

Incontestably the fastest graphics card we've seen in recent times and almost unfeasibly expensive, the X1900 XTX has a huge amount of untapped potential that could turn it into a barnstormer. Whether this potential will be realised and whether it's worth the cost is more debatable.

At first glance, the XTX offers little that's radical compared with the X1800 XT. Its memory bandwidth of 49.6GBps (gigabytes per second) is only slightly better than the X1800 XT's 48GBps. The XTX is built to the efficient 0.09-micron manufacturing process, but so was the XT - and 512MB of memory is no improvement.

But the key to the X1900 XTX's potential success is pixel pipelines - bags of them. These consist of programmable units that allow games coders to alter the way each pixel is shaded. The programmer can now create all manner of effects and textures.

First introduced in DirectX 8.0, programmable pixel pipelines have been used more and more by game coders looking to create something different from the norm. They're quickly replacing traditional dedicated texturing units in importance, since today's pixel shader can do most of the jobs previously handled by texture units - while consuming far less memory bandwidth.

That's been the theme followed by most of the big graphics card releases of modern times, although it's never before been made as apparent as here. The X1800 XT had 16 pixel pipelines, while nVidia's GeForce 7800 GTX boasted 24. But ATI has blasted both of those into submission with the X1900 XTX's 48 pixel pipelines.

In tests, the XTX was faster than both the X1800 XT and the 7800 GTX across many of today's games. On titles including Quake IV, Splinter Cell and Far Cry it was, on average, 2fps (frames per second) to 3fps faster at resolutions of 1,280x1,024 and 1,600x1,200 with no detail settings turned on. With anisotropic filtering and anti-aliasing turned up to the full, the lead reached 8fps to 13fps. But even with everything turned on, there were some games - Fear in particular - where the lead was not so great. Even the most modern of today's games aren't built to take advantage of the Radeon's stunning architecture.

The complexity of today's games should give you an idea of how sophisticated cutting-edge graphics cards have become. But this achievement has come at a price: today's high-grade cards consume an enormous amount of power. It makes little sense to pour your cash into a graphics card for your PC, only to find your pride and joy bursting into flames because the PSU (power supply unit) can't take the pace. A 450W PSU ought to be enough for the X1900 XTX or an equivalent, but why not go the whole hog and upgrade to the latest in PSU technology?

As an immediate purchase, the Sapphire X1900 XTX wouldn't make sense. It's far too expensive, and ATI is relying on games programmers sharing its view and cranking up the pixel pipelines to the full. It's a card whose time may come, but until then, you'll be better off with the X1800 XT, which is likely to hit a far more competitive price point with this release.