The relatively new art of wireless charging remains expensive and not without its flaws. 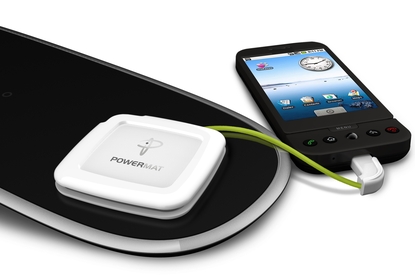 The Powermat Wireless Charging Pad is the best and most polished wireless charger that we've reviewed, but your willingness to spend this much should depend on how many devices you will be using with it. It is a convenient but expensive gadget that only comes into its own when used with dedicated iPhone, BlackBerry and Nintendo receivers.

The Powermat Wireless Charging Pad can charge three devices simultaneously. It's definitely the best-looking wireless charger we've reviewed, and it also feels like the most polished and has a better designed iPhone case than its competitors. However, the relatively new art of wireless charging remains expensive and is not without its flaws.

The Powermat Wireless Charging Pad looks much like a small skateboard. The matte black design with silver edging definitely makes it the most attractive wireless charger we've reviewed, and it feels much more refined than both the Uniden Wireless Power Pad and the Olin Wireless Charger for iPhone.

The Powermat Wireless Charging Pad has dedicated receivers for the iPhone 3G and iPhone 3GS, four BlackBerry models (Blackberry Bold 9000, Curve 8900, Pearl 8110 series and Curve 8300 series), and the Nintendo DS and DSi portable gaming consoles. The iPhone receiver is attached to a case for the handset, while the BlackBerry receiver is mounted on a battery cover that replaces the original. Powermat also has an Apple universal dock charger that will fit any iPod with a dock connector.

For all other devices, Powermat supplies a "Powercube" receiver that features interchangeable connections for a number of Apple, Nintendo, LG, Sony and Samsung devices, as well as a standard micro-USB connection. The Powermat Wireless Charging pad is very effective for devices that have appropriate sleeves, but the Powercube isn’t as convenient. You can only charge one product at a time and you need to change the tips if you have multiple devices. Any device without a dedicated receiver will require you to connect the tip, so technically it won't be charged wirelessly. An extra Powercube or dedicated receiver will set you back $49.95.

The Powermat pad has enough room to charge three devices simultaneously and there are three lights on the front of the unit to indicate when devices are charging. There are three specific spots marked on the Powermat that will charge your device, so you can't just drop it anywhere. The pad makes an odd sound when charging starts or ends; it can be turned down or off by pressing the volume button on the rear of the pad. Another button can dim or turn off the glowing charging lights. A USB port means you can also charge another device using the Powermat.

Powermat sells four variations of the Wireless Charging Pad, all retailing at $199.95. The Starter Kit includes a Powermat and Powercube, while there are also iPhone, BlackBerry and iPod bundles. The last of these includes a Wireless Charging pad and a universal iPod/iPhone dock, so it will charge any Apple product with a standard dock connection.

The Powermat bundles will be available in Australia through Harvey Norman, JB Hi-Fi, David Jones and selected Myer stores from 15 April.