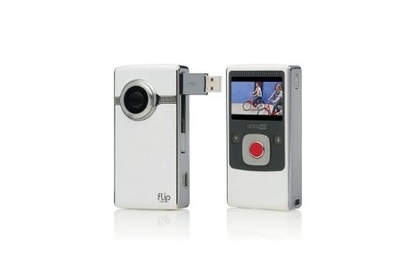 The Flip UltraHD is a better performer than the MinoHD and we prefer it, thanks to its doubled storage capacity, sharper-coloured footage, better zoom, user-replaceable battery and HDMI-out port.

Pure Digital has added another top-notch, high-def model to the mix. In fact, the brand-new Flip UltraHD might be the best HD pocket camcorder of the lot.

The Pure Digital Flip UltraHD is a bulkier, AA-battery-powered cousin to the tiny but impressive Flip MinoHD. Like its predecessor, the Flip UltraHD records smooth 720p video to MP4 format with the H.264 codec, and it includes FlipShare software for managing and editing clips, as well as for uploading them to YouTube. Flipping out the UltraHD's USB connector and plugging it into a Windows XP, Windows Vista, or Mac OS X 10.4 (or higher) computer launches FlipShare automatically.

According to our test results, this is Pure Digital's best pocket camcorder yet. The new Flip UltraHD has a wider-angle lens than the Flip MinoHD — though the Creative Vado HD remains the clear leader in the wide-angle realm.

Second, the Flip UltraHD captures more vibrant colours than the Flip MinoHD in well-lit settings. The yellow tint that was evident in some of the MinoHD's test shots seems to have vanished in the UltraHD's output.

The Flip UltraHD also improves on the Flip MinoHD's already strong low-light footage. In our test shots, the UltraHD showed slightly sharper images and better colour accuracy than the MinoHD. Like its Flip predecessors, the UltraHD captures smoother video than does its pocket-camcorder competition.

Another enhancement is the Flip UltraHD's zoom function. Though it's still a 2x digital zoom, it's easily the smoothest zoom we've ever seen on a pocket camcorder. The result: a sharp, noise-free image even when zoomed in to the max.

The Flip UltraHD adds a couple of new goodies to the mix, as well. The biggest addition is an HDMI-out port, which makes the UltraHD the first Flip camcorder model to offer that direct-to-HDTV-friendly feature. You'll have to supply your own HDMI cable, though: unlike Creative (with its Vado HD) and the Kodak (with its Zx1), Pure Digital doesn't include an HDMI cable in the box. You do, however, get two rechargeable AA nickel-metal hydride batteries, a wrist strap, and a soft carrying pouch.

The UltraHD packs double the internal storage of the Flip MinoHD, with an 8GB drive (versus 4GB); that's enough storage for two hours of high-def footage, as against the MinoHD's one hour cap. There's no expandable storage-card slot, however, as there is on the Creative Vado HD, the Kodak Zi6, the Kodak Zx1, and the Sony Webbie HD MHS-PM1.

Unlike the Flip MinoHD (but like older Flip models), the Flip UltraHD's flip-out USB connector is on its side. Depending on your computer's USB port arrangement, the fit may prove to be problematic; the rigid connector doesn't flex much, so you may have to unplug other USB devices to accommodate it.

Aside from its HDMI-out port, the UltraHD looks almost identical to older Flip Ultra models. It's not all-plastic, however: the front, bottom, and back of the unit are composed of rubberized plastic, while the sides and USB connector are made of metal.

The UltraHD has the same controls as older Flip Ultra models, with real buttons instead of the MinoHD's touch-sensitive divots. Under its 2in LCD, a four-way directional pad surrounds a big, red record button. Pressing left or right on the d-pad enables you to navigate through your recorded clips; pressing up or down operates the zoom. Dedicated play and delete buttons round out the controls. Like other Flips, it's an exercise in simplicity to operate.

The Flip UltraHD is a better performer than the MinoHD and we prefer it, thanks to its doubled storage capacity, sharper-coloured footage, better zoom, user-replaceable battery, and HDMI-out port.