A cheap and cheerful QNAP NAS device with iSCSI support 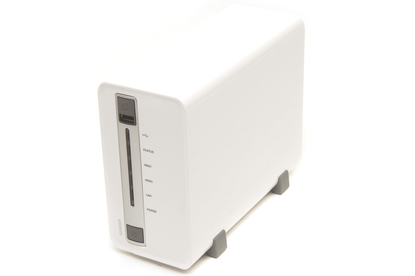 QNAP's TS-210 Turbo NAS device is cheap and simple, but doesn't have the performance and features found of more expensive products. As an entry-level server, however, the NAS device is a good value option.

QNAP's TS-210 Turbo network-attached storage device looks a little basic when you compare it to beefier two-bay NAS devices like the TS-239 Pro Turbo. However, it still fits two hard drives, provides up to 4TB of storage and even retains the ability to connect to iSCSI servers. While insufficient memory and a low-powered CPU will keep it out of a high-performance business environment, the cheap price makes it a tempting purchase for the home or small office. 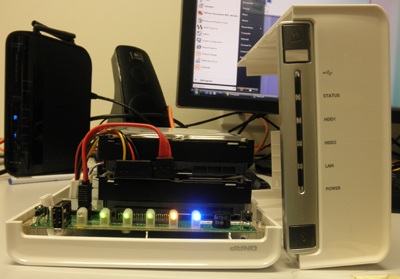 The QNAP TS-210 Turbo must be dismantled to insert the hard drives.

The TS-210 Turbo NAS device can fit two drives at the same time, but, like the TS-219 Turbo, it has no drive bays. Instead, you'll need to physically open the enclosure and screw both drives in. You won't be able to hot-swap these drives later on, but this shouldn't be a problem for a set-and-forget storage setup.

Drives can be configured in RAID levels 0 or 1, as well as a linear volume that combines both drives. The TS-210 Turbo lacks QNAP's online RAID expansion, migration or recovery features so you'll have to create an entirely new volume if you replace one of the drives.

The back panel offers a single Gigabit Ethernet port and two USB 2.0 ports that can be used for connecting external hard drives as well as printers and UPS devices. There's a third USB port on the front along with a one-touch copy button that can be set up to copy to or from USB flash drives and external hard drives. Support is provided for drives formatted in ext3, ext4, FAT32 and NTFS file systems, though HFS+ drives (for use in MacOS X) won't be recognised.

Though many small businesses can probably live without RAID migration and AES encryption, the TS-210 Turbo NAS device's components are inefficient for processor-intensive operations. Inside are an 800MHz Marvell 6281 processor and 256MB of DDR2 memory; a serious step down from the 1.6GHz Intel Atom CPU and 1GB of memory utilised by the TS-239 Pro Turbo. The TS-210 Turbo's low-end specifications make it more power efficient — expect it to use 22.5-26.5 Watts when two hard drives are installed — though they have a noticeable impact on performance.

In our tests, the QNAP TS-210 Turbo NAS device fell behind its beefier brethren — the TS-219 Turbo and TS-239 Pro Turbo — but managed to outmatch similarly priced competition. The RAID 0 configuration helps, but the tests still show that, in general, the TS-210 Turbo NAS device is acceptably fast for basic file transfers and high-definition media streaming.

The Web interface is clean, simple and fairly easy to use.

While the TS-210 Turbo's enclosure and components might deviate from QNAP's norm, the server capabilities certainly don't. It provides the same user interface and many of the same features you would find on any of the company's current range of NAS devices. An AJAX-based Web interface provides a clean view of administration options, as well as access to file and multimedia management, BitTorrent and HTTP downloads, and surveillance monitoring if the NAS device is teamed with a compatible IP camera.

For small businesses, the NAS device provides a few security options like IP lockout settings for individual network protocols and SSL secure certificate compatibility. Backup options include replicating the NAS device's data to external hard drives, remote rsync servers or specified third-party backup applications. While it is possible to enable support for Apple's Time Machine, this isn't built-in and requires some technical knowledge to configure (unlike with Netgear's Stora).

Using the Web interface you can easily set user and quota permissions, as well as individually enable or disable a range of networking protocols to suit Windows, Mac or Linux environments. The NAS device can even function as an Web or FTP server. A Twonky Media-based UPnP/DLNA and iTunes compatibility can serve media across a local network, though the Web interface provides no way of viewing files within a browser.

We certainly wouldn't recommend the TS-210 Turbo NAS device if you're looking to support 10-15 people with continual backups and file transfers. However, as an entry-level network storage option with some server capabilities, the TS-210 Turbo provides good value.