Though expensive, this NAS device shreds the competition in transfer speeds 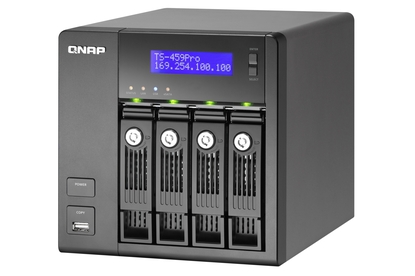 Despite its small stature, the four-bay QNAP TS-459 Pro Turbo NAS device packs a mean punch. There are plenty of features to suit the home and small office, and it's powerful components will make for quick backups and lag-free media streaming.

QNAP's latest network-attached storage (NAS) devices might not look much different from their predecessors, but there's a lot more power packed underneath the hood. Armed with Intel's latest dual-core Atom processor, the TS-459 Pro Turbo is blazingly fast for a four-bay NAS device and QNAP's latest firmware means it's a competent server for the home and office.

Like the TS-419P Turbo NAS, the QNAP TS-459 Pro Turbo has a brushed metal enclosure with four individually lockable drive bays that suit both 2.5in and 3.5in hard drives. The trays aren't tool-less, so you'll need to screw the drives in prior to inserting them.

The TS-459 Pro Turbo NAS device has four USB ports on the back panel, and a fifth at the front, accompanied by a one-touch copy button that can be configured to back up to or from external hard drives. Two eSATA ports allow for faster transfers from external storage, though the NAS device only supports ext3, ext4, NTFS and FAT32 file systems; hard drives with the HFS+ file system used by Mac OS X are not currently supported.

There are two Gigabit Ethernet ports on the back of the NAS device which support failover and load balancing. This means that both ports can balance network traffic over a single IP address; if one port fails, the other will simply continue operating as normal.

The most interesting aspect of the TS-459 Pro Turbo NAS device is what lies at its heart: an Intel Atom D510 CPU. Clocked at 1.66GHZ, the D510 is one of the first dual-core Atom processors, as well as the first built for low-power desktops rather than netbooks. Because of this, it provides better performance than older Atom processors while retaining relatively low power consumption. QNAP has teamed this CPU with 1GB of DDR2 memory; a potent combination for a NAS device.

During testing, we found the TS-459 Pro Turbo NAS consumed 34.8 Watts when idle and, even when running two Barracuda 7200.11 1.5TB hard drives, it only reached a maximum power consumption of 40.9W.

We test all NAS devices by connecting them through a Gigabit Ethernet network to a testbed PC with a 300GB Western Digital Velociraptor hard drive. We run Intel's NAS Performance Toolkit, which determines how the NAS device performs when streaming 720p high-definition media from the device as well as the ability to record the same video while performing backup operations.

We also run two file transfer tests to see how the NAS device performs in the real word. One file transfer test uses 3000 1MB files; this is intensive for both the hard drives and the embedded processor, and a good test of how it will perform when backing up your computer. In addition, we transfer 20GB worth of 3-4GB files, a faster test that is similar to dealing with large videos, disk images or database files.

The QNAP TS-459 Pro Turbo NAS device achieved our fastest overall results yet in Intel's NAS Performance Toolkit, as well some of the fastest file transfers. From our real-world tests, it's clear the NAS device isn't quite as strong as Netgear's ReadyNAS Pro Business Edition when it comes to writing data, which only a major concern for intensive tasks like video editing.

Setting up the TS-459 Pro Turbo is incredibly easy; the NAS device's LCD screen provides "touch-n-go PC-less installation," which lets you setup a drive RAID array and encrypt volumes without having to install firmware first or use a bundled utility on a client PC. Once set up is completed, you will have access to the same useful AJAX-based interface that we've seen on previous QNAP NAS devices.

The clean interface makes configuration easy and there are plenty of wizards to guide users through basic tasks like setting up network protocols and changing user access rights or quotas.

Drives can be configured in RAID levels 0, 1, 5 and 6, as well as single or linear disk JBOD volumes. There are network protocols to suit Microsoft (SMB), Apple (AFP/Bonjour) and Linux (NFS), as well as FTP and secure HTTP servers.

The TS-459 Pro Turbo NAS device offers an iTunes server, as well as a DLNA-compliant UPnP media server that can stream music, videos and photos over a network to compatible DVD players, media players and even some televisions. You can access a separate media browser through the Web interface, though this is little more than a file list; the audio and photo browsers available on Synology's NAS devices are much more useful.

Backups can be scheduled and configured to use external storage devices, remote servers and Amazon's S3 cloud storage platform. QNAP has also added direct compatibility with Apple's Time Machine, a feature which was previously difficult to set up on the company's NAS devices. Along with AES encryption for individual volumes, small businesses should benefit from an IP block-out system that can be configured for each network protocol, and a customisable firewall.

The TS-459 Pro Turbo's iSCSI target feature isn't out of the ordinary, though we appreciate the ability to use the NAS device as an iSCSI server itself; simply enable the "Virtual Disk" feature to use other iSCSI targets as local storage.

Given QNAP's track record, it's no wonder the TS-459 Pro Turbo NAS device has so many features. Not all of them will be useful to every user, and some features may be beyond the novice users. However, with high performance and the ability to create a basic configuration at a few presses, this NAS device is certainly useful in both the home and small office.