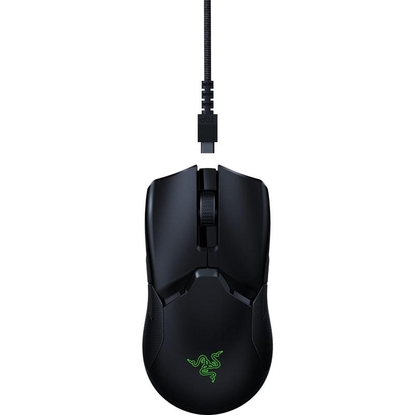 The Viper Ultimate is precise and tactile to use in the way that you want and need a gaming mouse to be, plus an awesome showpiece during the downtime between those moments.

Should I buy the Razer Viper Ultimate?

The Razer Viper feels like a mouse that’s geared towards diehard fans from the jump.

Like the original Viper, the new Viper Ultimate features same ambidextrous design and more durable-optical switches. The things you love or might like about that mouse are totally still here.

It is slightly heavier than the lightweight Viper at 74gs. However, despite the added heft, it still manages to hit a lot of the same notes and then some.

Unlike the original, the Viper Ultimate features Razer’s HyperSpeed wireless tech. You can still use it as a wired mouse, of course. But with 70 hours of battery life, 50g acceleration and a 20,000DPI sensor at your disposal, the Viper Ultimate is practically begging you to cut the cables out of your desktop gaming experience.

It’s hard to make the case that anyone really needs to the best-in-class connectivity, sensitivity and battery life offered by the Viper Ultimate but it’s easy to want it nevertheless.

In Australia, you can score the Razer Viper Ultimate for approximately AU$259.

You can buy the Razer Viper Ultimate through following:

The new wireless version of Razer's latest gaming mouse is slightly heavier than the regular Viper at just 74gs. However, despite the added heft, it still manages to hit a lot of the same notes. It’s not the lightest wireless gaming mouse around but it’s still pretty light and it does come with more than just the perks you’d expect.

Like the original Viper, the new Viper Ultimate features an ambidextrous design and optical switches. If you’re unfamiliar with the latter, this basically involves using an infrared light beam and a shutter rather than a physical mechanism to detect and send electrical signals.

Though the end-user experience here isn’t radically different from what you’ll get out of a normal gaming mouse, it does mean that there are less moving parts here and thus, less points of failure. Razer claims that the optical switch inside the Viper Ultimate is good for 70 million clicks, versus the 50 million in more traditional mechanical switch-based gaming mice.

That number is, of course, so high it boggles comprehension. Still, if you buy into the notion that more clicks is better clicks is better than less clicks, it’s a decent enough selling point.

Unlike the original Viper, the new model relies on Razer’s HyperSpeed wireless connectivity tech. You can still use it as a wired mouse, of course. But with 70 hours of battery life, 50g acceleration and a 20,000DPI sensor at your disposal, the Viper Ultimate is openly daring you to rip the cables out of your desktop gaming experience and go full wireless.

The one thing that frustrates me here is that Razer (and others) haven’t really looked to recently is the idea of consolidation. If I could use one super-dongle (rather than clog up my PC’s USB ports with multiple receivers) to connect together all my HyperSpeed-enabled Razer hardware, it would make the overall much more convenient and Razer a much easier brand to elevate over the rest.

That’s not to say that Viper Ultimate isn’t easy to recommend. In action, it rarely disappoints. The new Viper has a similar - though subtly-different - feel to the iconic DeathAdder, owing to the rubberized grips on the side. It doesn’t have quite the squishy give you’d get from HyperX’s new Pulsefire Dart but it does have a nifty sense of character regardless

Last but not least, the Viper Ultimate comes with a slick charger stand.

When mounted, this ties neatly into Razer’s Chroma RGB ecosystem to give off a soft but  voluminous glow. Assuming you have the space for it on your desktop, it’s another point of difference between the Viper Ultimate and most other wireless gaming mice - even if it is mostly just an aesthetics thing.

The Razer Viper feels like a mouse that’s geared towards Razer fans from the get go. If you count yourself among the converted, you’ll probably love it. This thing does a great job of playing to the crowd every chance it gets. It’s precise and tactile to use in the way that you want and need a gaming mouse to be, plus an awesome showpiece during the downtime between those moments.

If you have the money and want to go in on one of the best wireless gaming mice money can buy, the Viper Ultimate is right up there.

The Razer Viper Ultimate a little too expensive for your budget? Check out our guide to the best gaming mice here for some other options.