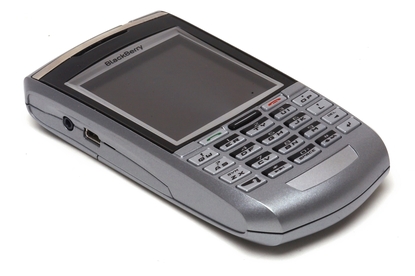 If you're after a phone first and mobile email second, the 7100g is the BlackBerry for you.

A common complaint about the popular BlackBerry email-centric devices is that they're too bulky. RIM has taken this on board and expanded its range of BlackBerry handhelds with what it calls "business phones". The silver 7100g is a notable departure from the familiar chunky email-capable handhelds, which will make it appeal to a wide audience.

It includes all the standard BlackBerry features, like the ability to send and receive email via an Exchange or Domino server or directly through POP accounts. It's possible to synchronise calendar, address book, email and task list between a desktop PC and the handheld via the straightforward bundled software. It charges over the USB connection, too.

The screen is well lit, but it's a little small compared to some of the more dedicated email-friendly BlackBerry models like the 7230 or 7290. The keyboard is also cramped for large fingers, but with practice it's possible to achieve a reasonable typing speed. It's adequate for answering the odd email and setting appointments, but not ideal for entering long blocks of text.

Bluetooth is bundled natively, but the unit also ships with a cabled earpiece and microphone for hands-free operation. There's full support for polyphonic ring tones, a built-in speaker phone and 32MB of on-board storage.

You need to buy the device before getting it connected to a provider. At time of reviewing, you could get it connected through Optus on with an access fee of $45 per month (on a plan over 24 months). The plan includes a capped fee of $99 for up to $500 of voice and data calls (see www.optus.com.au/blackberry for more details).

The device fits well into your hand and yet still offers email functionality. They keyboard is easy to use, and the screen is clear. In fact, the 7100g is a great all-round device.