The Curve 8900 is the smallest and lightest BlackBerry with a full QWERTY keyboard, but the lack of 3G is disappointing. 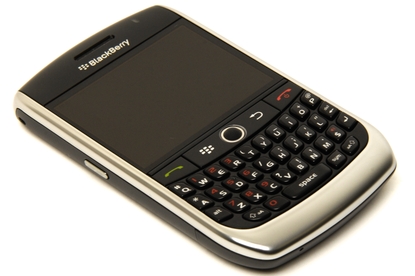 Despite lacking 3G, the BlackBerry Curve 8900 is still an excellent smartphone, and it boasts an outstanding display. The stylish and compact design makes it the best looking BlackBerry yet, without compromising the end user experience.

Initially launched with Vodafone in Australia (other telcos don't offer the handset yet), the BlackBerry Curve 8900 is a delight to look at. It’s a comfortable size, and much more compact than both the BlackBerry Bold and the BlackBerry Storm. Importantly, though, the smaller real estate hasn’t affected the overall user experience. The full QWERTY keypad and the standard BlackBerry trackball both remain at the heart of this smartphone.

Physically, the BlackBerry Curve 8900 has taken the best bits of the Storm, the Bold and the previous BlackBerry Curve 8300 and combined them to produce, in our opinion, a BlackBerry that boasts the best combination of looks and style without compromising the end user experience. The Curve 8900 also feels well built, aside from the rear battery cover which rattles slightly and could have been better secured.

Being an e-mail-centric device, one of the most important aspects of any BlackBerry is its keyboard. Despite the smaller amount of space RIM had to work with for the Curve 8900, its keyboard remains impressive. We still prefer the layout of keys on the BlackBerry Bold, but after typing for just a couple of hours you should adjust to the Curve 8900's keyboard. Our only complaint is that the keys are slightly noisy when pressed, emitting an annoying clicking sound.

The BlackBerry Curve 8900's display is simply superb. The 480x360-resolution screen is bright, crisp and clear, produces excellent colour and has great viewing angles. Despite the glossy finish, fingerprints are easy to clean, and viewing the screen in direct sunlight isn’t an issue.

The outstanding display is put to good use, with the same operating system as the BlackBerry Bold. New features in the latest 4.6 version include improvements to the BlackBerry browser, editing support for Excel and Word documents and a bedside mode that conveniently switches off light, sound and vibration alerts, dims the screen and turns the Curve into an alarm clock while you sleep. The bedside mode is accessed through the alarm, and according to RIM it is a direct result of customer feedback.

The user interface is excellent. Moving along the row of menu icons on the default home screen results in a small flash of light shining on the selected icon, and you can customise it so any application or icon appears on the home page. The main menu again uses a simple yet effective grid format with labelled icons.

E-mail support is as strong as ever. The BlackBerry Curve 8900 supports e-mail services provided by Vodafone through the BlackBerry Internet Service (BIS) or the BlackBerry Enterprise Service (BES). We connected to a regular Yahoo! E-mail account through the Vodafone portal and had no issues. Impressively, Microsoft Word and Excel documents can now be edited as well as viewed thanks to the on-board Word To Go and Sheet To Go applications.

For mobile Internet, the included BlackBerry browser can't compete with Safari on the iPhone 3G, but it remains a viable solution for browsing the Web. Pages are rendered well, though panning around a page is more arduous than should be — we recommend pumping up the trackball sensitivity when using the browser, but it's still too easy to accidentally click a link.

The BlackBerry Curve 8900 features Wi-Fi, Bluetooth and built-in GPS. The lack of 3G is arguably the biggest disappointment: although e-mail doesn’t skip a beat, and downloadable social-networking applications such as Facebook and TwitterBerry work fine over GPRS, many users will still be turned off by the backwards step when it comes to over-the-air connection speed.

RIM's latest BlackBerry phones have plenty of appeal for regular consumers as well as businesspeople. The Curve 8900 features a 3.2-megapixel camera with autofocus and flash, a standard 3.5mm headphone jack and a microSD card slot for extra memory. It handles most media well — especially videos on the superb display — and the external speaker is loud and clear. It can synchronise with Apple's iTunes using the BlackBerry Media sync software. With these multimedia features in mind, it is puzzling that Vodafone is currently only selling the BlackBerry Curve 8900 to corporate consumers and has not yet announced consumer availability.