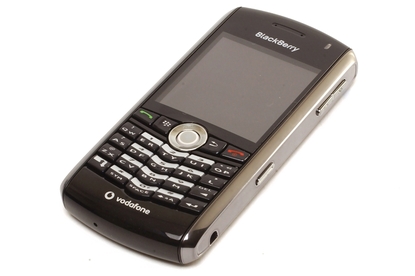 Finally, a BlackBerry that appeals to the regular consumer. The Pearl is an excellent device that sacrifices none of RIM's famous email functionality while still managing to provide a compact and light form factor and multimedia capabilities.

The BlackBerry has long been synonymous with business. Compared with today's multimedia-savvy phones, Research In Motion's addictive devices have had something of a staid image; but this has changed with the impressive BlackBerry Pearl 8100, the first BlackBerry to have a built-in camera, and both audio and video players.

Die-hard BlackBerry fans will be glad to hear that the addition of all these consumer-friendly features hasn't lessened the device's messaging prowess. The Pearl supports the RIM push e-mail technology that has made the BlackBerry so popular, and adding a POP3 e-mail account is a snap. You simply enter your e-mail address and password, and within minutes your messages will be delivered to the device. It also supports AOL, ICQ, MSN, and Yahoo instant messaging networks.

The candy bar-style Pearl has an attractive shiny black-and-silver finish. The handset is noticeably light and petite, weighing just 89g. However, its compact size comes with a trade-off; the Pearl's keys are quite small, so those with large fingers will experience problems typing.

Like BlackBerry 7100 series models, the Pearl features a SureType keyboard, a modified QWERTY keyboard that saves space by combining two letters on most keys. Once you start to type, the SureType system suggests words based on the letters that you've entered. When SureType guesses correctly the system is a wonderful time-saver, although this doesn't always happen, meaning it can become a time-consuming chore. The best feature of SureType is the fact that the Pearl will automatically scan all incoming emails, messages and phone book entries and add words not already in the SureType word list.

For navigation, an incandescent pearl-white trackball sits on the face of the phone, immediately below the display. This trackball replaces the standard BlackBerry jog wheel. The effect is aesthetically pleasing, but we're not sure how the trackball will hold up after a few months of use. It doesn't feel strong or sturdy.

In our tests call quality was mixed: On some calls voices sounded loud and clear, but on others we noticed a slight echo. The device's talk-time battery life is excellent lasting 8 hours and 34 minutes in our tests.

Among the Pearl's biggest attractions are its multimedia capabilities. The included 1.3-megapixel camera is easy to use, though it lacks a dedicated shutter control (instead, you press the trackball to capture shots, and roll the trackball to zoom in or out). The built-in flash is handy for low-light shooting. Picture quality was about average: bright colours looked washed out, and snapshots sometimes lacked crispness. The Pearl doesn't capture video, but it does play video clips, which look fantastic, if small, on its 240 x 260 pixel TFT display.

The Pearl is the first BlackBerry to be equipped with a music player. You can transfer AAC, MP3, and WAV files to the device via the included Desktop Manager software. You can also store music files on a microSD card (not included), but the card slot is inconveniently situated beneath the phone's battery.

Overall, none of the new features on the Pearl qualifies as truly innovative, but when you combine its well-executed features with RIM's messaging capabilities and the device's sleek look, the BlackBerry Pearl is clearly a winner.